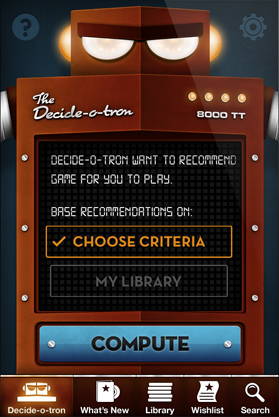 Video games industry consultancy firm EEDAR and the dudes from Penny Arcade are assembling an iOS app that’ll tell you what game you should play next, and presumably, surprise you with a game or two you haven’t heard about before. It’ll be called the Decide-O-Tron and it’ll roll out at some unspecified date in the near future for the generous price of $0.

“The Decide-O-Tron is essentially Pandora for games, that’s about as clear as I can make it,” Penny Arcade’s “Tycho” wrote on the site’s blog. “It can very quickly build a library of the games you like and own, and then — just as quickly -— tell you what you should play next. It will be available for iOS devices, and it will be free.”

In addition to being able to document your own library of games for use in the app, it’ll also give you access to EEDAR’s ridiculous-huge database that draws from just about every modern-ish platform, including the Xbox 360, the Virtual Console, and even the GBA and Gamecube. From what we understand, as it nails your likes and dislikes, it’ll suggest games from this database. You’ll also be able to browse celebrities’ lists, too, if you want to play what all the cool kids are.

“We spoke at Digipen a super long time ago with a guy named Geoff Zatkin who was clearly way smarter than us, but he didn’t make us feel bad about it,” Tycho said in the post. “We kept in touch with him, and eventually he opened a consultancy called EEDAR that almost certainly pops up in your feeds from time to time.”

“Geoff asked us if we wanted to do something cool with their database, and we did! We made Decide-O-Tron.”

We’re pretty into something like this, though we’re pretty sad to see that iOS games aren’t a part of the package. Sure, there’s a lot of crap out there but for every eight or nine disease-ridden apples, there’s a HungryMaster [$2.99] or Mos Speedrun [$1.99 / Lite], you know?

In case you’re scratching your head and readying up a “why is this news” comment, hold back for a second and let me explain: we’re into Penny Arcade, we’re into discovering video games, and we’re into iOS. This is a super combination of all of these things, so we’re telling you about it. You can read more about the Decide-O-Tron at its Web site.