Duke Nukem Forever proved earlier this summer that if you find something ancient, non-functional, and barely relevant, with a minimal amount of effort you can turn a profit by selling it purely on the basis of historical curiosity. This is also the premise of the History Channel’s Antiques Roadshow, where people bring in old items to experts hoping to strike it rich by stumbling upon rare and sought after pieces.

Namco Bandai, also no strangers to digging up cheap old franchises and pawning them off on unsuspecting gamers, decided to capitalize on the popularity(?) of the series by releasing Antiques Roadshow [$4.99] for iOS. After taking a monocled eye and a white gloved hand to this title from start all the way to laborious finish, how does it fare in appraisal? Let’s just say it’s going to take more than some wood glue and a certificate of authenticity to justify the price of this junk.

Antiques Roadshow attempts to do for collectible hunting what Indiana Jones did for archeology, by playing up the glamorous, mysterious, dangerous, and metaphysically profound lifestyle of an expert antique hunter. In the game, you play as Julia, an enthusiast who takes a job at an antique store to pursue her life’s passion. The plot quickly thickens as her new boss presents her with a shred of photo featuring a mysterious item and a secret code inscribed on the back. Julia rushes off to find the item in a foreclosed farmhouse before anyone else gets their greedy paws on it. 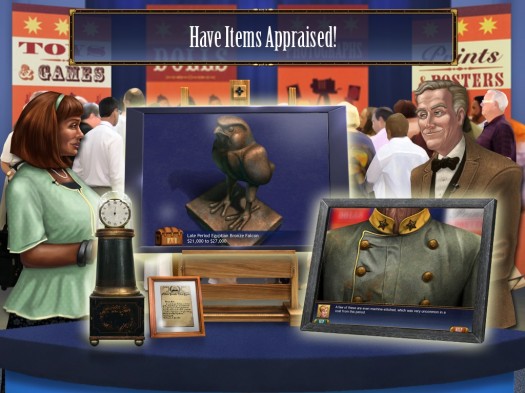 I’ll come back to the edge-of-your-seat storytelling in just a bit, but first let’s talk about the non-stop action on tap here. Antiques Roadshow is essentially a skin for yet another photo hunt game; touch the hidden objects to cross them off your list. Then touch them again because only a tiny sliver of the object is visible and the touchscreen won’t register your tap accurately enough. Repeat until the screen decides to be charitable or your bratwurst-like fingers grow skinnier due to malnourishment.

Most gamers, when confronted by a hidden object title, will quickly resort to turbo-clicking around the screen hoping to get lucky and circumvent some of the searching. This game tries to keep you honest by making it so that if you tap too many times in succession the screen becomes covered in virtual dust that you “stirred up"  by searching too quickly. You then must “wipe” the dust off the screen to continue hunting. The first few times were cool and novel, but when you factor in the sloppy input sensitivity, just trying to get a single item cleared from the screen resulted in a dust storm as often as not. By the end of the game, I began wishing the white powder was anthrax. 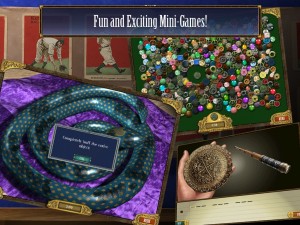 In addition to the story items and junk items that you can find, you will also stumble across other hidden items that can be taken to the Antiques Roadshow in between photo hunts. These trips to the Roadshow represent the game’s only deviation from the tap-a-licious core mechanics in the form of mini-games. Before presenting your items to the Roadshow experts, you must do the one thing that every Roadshow expert on television tells you NOT to: restore your found items yourself. That’s right, Julia is a rebel, the nihilistic bad-girl of the antiques world. Priceless 1700’s armoire falling apart? Just squeeze some wood glue in the cracks like a boss. One of a kind Civil War uniform looking a little frumpy? Then search through a pile of your old buttons to find matches for the originals and just sew them on!

You think I’m joking about Julia’s penchant for mayhem, but don’t let her conservative attire fool you. Beneath that Stepford Wives exterior lies the heart of a felon. Julia is constantly finding items that allow her to access previously blocked areas, and she is not afraid to use them. After getting her B&E on by using a sledgehammer to smash open the door to a shed, she later in the game opens a grave in an ancient crypt by shattering the marble in with another hammer, and blows open a century old chest with an M80 firecracker that she found abandoned for years in another location. Clearly, Julia takes the honey badger approach to the acquisition of historical artifacts. 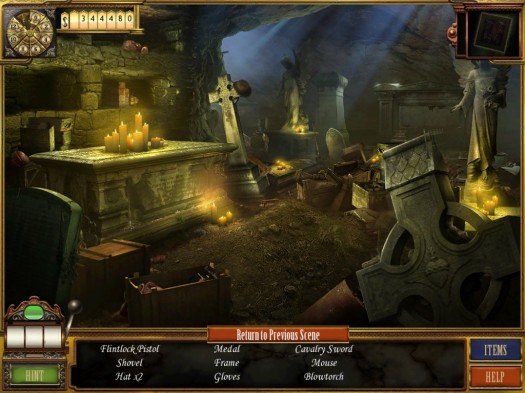 Julia’s story gets progressively more and more absurd, and not in a good Japanese development kind of way. The game climaxes in an Empire Strikes Back-like familial revelation, the discovery of a lost pirate stash, and a wildly presumptuous set-up for an Antiques Roadshow sequel. Let’s put it this way. This plot’s plausibility makes National Treasure look like a PBS documentary.

With the exception of infrequent trips to the Roadshow, there’s none of the cool historical information that gives the television show its redeeming qualities. Throw in the painfully repetitive tapping, the abysmally unresponsive nature of all iOS hidden-item touchscreen inputs, the irritatingly unfair dust-on-the-screen mechanic, and a dash of insultingly simple mini-games and there’s just no excuse. In the far flung future, however, this game may have great value; iPads with this game still on it will no doubt be rare beyond belief.