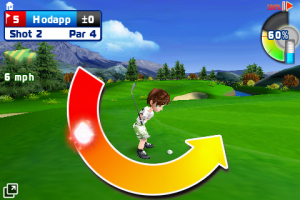 We have come such a long way from Steve’s iPhone SDK announcement in late 2007. Even before the official SDK was released, developers were writing simple games. Simple games evolved in to pick up and play examples of gaming perfection like Flight Control [App Store] and Scoops [App Store]. Ambitious developers have even released some great 3D games. But last weekend, Gameloft’s Let’s Golf [App Store] raised the bar to a whole new level in providing what can best be described as a remarkably console-like 3D gaming experience at the very reasonable price of $5.99.

Let’s Golf features several game play modes, briefly outlined in our first impressions review. The first of which is Instant Play, which is pretty cut and dry. Upon selecting your golfer, you’re thrown into a random selection of three holes–Complete them all, hopefully under par, and you’re done. 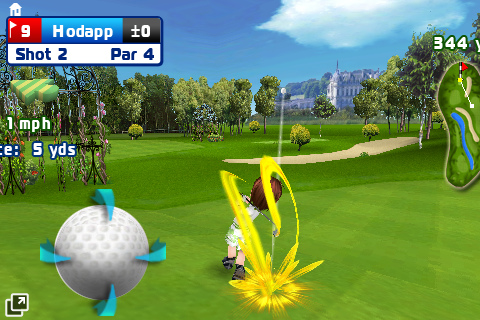 After breezing through the included tutorial and getting a handle for the controls, most players will probably want to skip the Instant Play mode and head straight on over to Tournament mode to tee off against several AI golfers for fame, fortune, and most importantly…unlockable clothing and accessories!

In your first tournament, you only have access to two golf courses in easy mode with 1-9 hole, 10-18 hole, 1-18 hole, or 9 hole shuffle options. As you win trophies, more courses are unlocked, as well as additional difficulty levels, items, and golfers. While Let’s Golf only features four available golfers, they can each be customized with clothing, headwear, and golf balls. These seem to be randomly rewarded, as I won a dress for Elena while playing as Vincent. 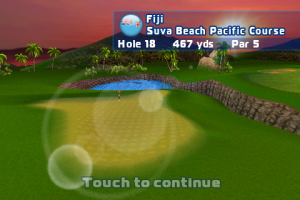 Character attributes are measured across four different statistics: power, accuracy, recovery, and putting. Equipping different unlocked items provides an opportunity to increase these stats. For instance, the “school girl suit” provides +1 to recovery, making it easier to accurately hit the ball in the rough. Another noteworthy bonus of unlocking these perks is: any benefits gained from equipped items are also present while playing in Instant Play, Free Hole and multiplayer modes. The final single player game mode is Free Hole, where you can play on any of the four courses and any hole set by yourself, on any difficulty

Let’s Golf would be an excellent game with just these play modes, but Gameloft takes it one step further and includes not one, but two ways to challenge another player to a round of golf. In Hot Seat both golfers play using one device, passing it back and forth, depending on whose turn it is. If you find another person who also owns Let’s Golf, you can challenge them to a local WiFi match where each player uses their own device to compete. In my testing, both multiplayer methods worked great. Playing over local WiFi has a small amount of lag, but nothing that would ever be noticeable unless you have both screens side by side.

Let’s Golf has two available control methods: Classic and Advanced. Classic mode plays like most golfing games where you press a button to start your swing, again to select your power, and a third time to select your accuracy. Classic controls also provide an indicator on the swing power selector to show how strong your swing should be to end up in the estimated landing grid. 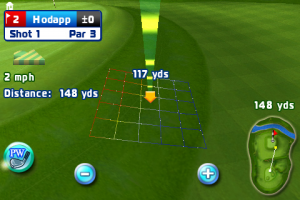 By moving this grid around, different clubs are automatically selected depending on the distance. Also like most golf games, the grid indicates the elevation of the terrain using a red to blue gradient, and the incline using small dots that move across the grid, downhill. While putting in Classic mode, you choose what direction your character is facing and the strength of your putt. Even though the game gives you an estimate of how hard you need to hit the ball on the green, putting on an incline or from a long way away can still be pretty challenging.

In Advanced mode, while clubs are still automatically chosen, you are given no indicator for how strong your shot should be. Instead of the three-click method, you move your finger in a semi-circular pattern to swing. While some players may prefer this control method, I didn’t really feel it added to the difficulty of the long game at all and, instead, artificially inflated the difficulty of the short game. While classic controls help you determine the strength of your swing, it doesn’t take into account the wind, and shots that are perfectly lined up rarely land dead center in your targeting grid. Putting in advanced mode, however, is truly something else. Without any real idea of how hard you need to tap the ball, getting it in the hole once you’re on the green in advanced mode can be extremely brutal.

With both control methods, you can add English to the ball after the ball is in the air by dragging your finger across a representation of the ball that appears in the lower left corner of the screen. If there’s one thing I’d really like Gameloft to tweak, it would be how this works. There’s only one speed that you can spin the ball, and it never really seems to be enough to make that big of a difference.

Let’s Golf plays remarkably similar to the Sony PSP’s Hot Shots Golf: Open Tee and does a great job in duplicating all the fun things about the Hot Shots series. The graphics are superb for an iPhone game and the only noticeable frame rate dips are minor and only seem to occur when the camera pans out quickly. One complaint I have with the title is the fact that the indicators used to swing your club are tied to the frame rate of the 3D components of the game. Small frame rate hiccups have caused me to miss a few perfect shots as the power gauge stuttered for a tiny fraction of a second.

Another negative is the fact that there’s no option to listen to your own music while playing (and the included track gets somewhat repetitive). Let’s Golf also doesn’t respect the state of the ring/vibrate switch on the iPhone, playing all music and sound effects regardless. Also, I would love a way to see replays, and ideally somehow save replays to show unbelievable shots to friends, later.

Gameloft provides a very complete golfing experience for the iPhone in Let’s Golf at a fraction of the price you would expect to pay for an identical game on a “real console". Our forums have been going wild with praise for the game, and as of this writing, Let’s Golf is sitting at a comfortable 4.5 stars in the App Store.  If you liked the Hot Shots series, you’re doing yourself a disservice by not picking up this game.  Something to keep in mind though is the fact Let’s Golf is an arcade style sports game, so if ultra-realism is your thing, you might want to hold off to see what Tiger Woods PGA Tour ’09 has to offer.