Last September Namco released Time Crisis 2nd Strike [$6.99/HD], a game that offered a technically competent experience akin to their classic arcade light gun game series, but also one that lost most of what made it fun in the transition to the touch screen. Light gun games just aren’t as good without the, well, light gun. Time Crisis, along with most every other gallery shooter on a touch screen, isn’t quite as satisfying when all you have to do is tap directly on a target to shoot it.

A few weeks back though, Namco released the iGunCon [Free], an interesting app that tries to replicate the experience of using a physical controller in Time Crisis 2nd Strike using a second iOS device. At a time when peripherals like the Joypad Game Controller [Free], the iCade, and the iControlpad are offering cool new ways to play iOS games, the idea of a clever option for a light gun really interests me. In practice, the iGunCon certainly works, just not well enough to offer the type of solid experience that you would want. But, it’s still a neat novelty to play around with, and if the tech improves it could turn into a real alternative for Wii-like motion controls in iOS games sometime in the future. 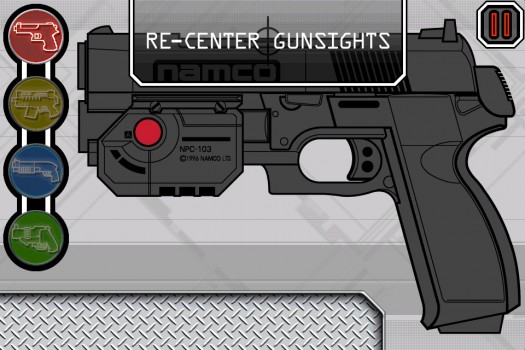 First off, the iGunCon can only work with devices equipped with a gyroscope and a digital compass. So basically, just an iPhone 4 or iPad 2, for now. It uses these parts of the hardware to track the movement of an onscreen cursor when aiming by pointing and moving your device. The setup is extremely easy, just involving selecting the iGunCon from the options screen when both devices are on the same local WiFi network or connecting over Bluetooth. The iGunCon can be used to play Time Crisis 2nd Strike on an iPhone, iPod touch, iPad, or in the Mac App Store version of the game. 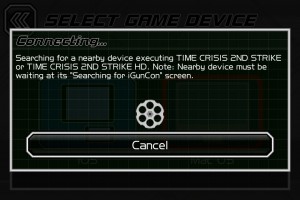 While the setup is really simple, actually using the iGunCon to play the game isn’t quite as successful. You can recalibrate the aiming reticule at any time right from the same screen you use to play, which is great, but the cursor movement is pretty choppy and doesn’t always feel totally accurate. It’s easy to adapt to with a few minutes of practice, but don’t expect the same precision you would have with a real light gun or even the default tap-to-shoot option. But, if you can accept that things aren’t totally perfect, it can actually be pretty fun to use the iGunCon.

Besides being used as a light gun controller, the iGunCon app itself can also be used as a toy gun, similar to something like the iGun [99¢] and its many derivatives, and makes the different firing sound effects that are used for the weapons in the game. There are also options to use different graphics based on the various GunCon peripherals from the arcade and console versions of Time Crisis games over the years, which is actually a pretty cool nostalgic touch. 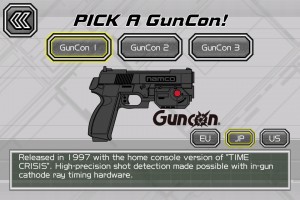 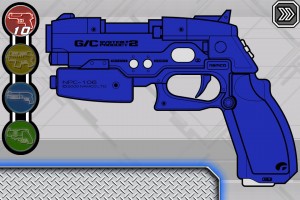 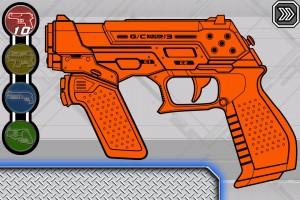 While it doesn’t work completely perfectly, the iGunCon app is a neat peripheral that gives you a different way to experience Time Crisis 2nd Strike, and it’s actually pretty fun, too. Best of all it’s free, so there’s no reason to not at least give it a try to see what it’s all about. With some refinement, the tech could lead to some interesting gameplay experiences in the future. For now it remains mostly just a novelty, but definitely one that’s worth checking out.