We’ve seen a lot of physics-based puzzle games since Angry Birds hit its current pop culture status, but Bizango Blast [$.99] is one of a handful that has something new to share. Rendered in 3D and presented in first-person, creator Olivier Archer’s game attempts to be a more in-your-face experience, while still being centered on perspective and angles of approach. Sadly, the only thing it knocks out of the park are its Unreal Engine visuals. The real meat of the game — the physics, the puzzle design, and the canon play — feels clumsy and unpredictable at the best of times, and flat-out bad the rest of the time. It’s a unique attempt, but not recommended. 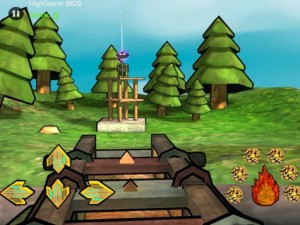 Like most fixed-turret games, the nuts and bolts are wildly simple. You control a turret and the trajectory of its ammunition. The goal is to knock down physics-enabled constructs which nest a special object or objects. In this specific case, you’re firing balls at satellites sitting atop flimsy towers made of materials like wood or concrete.

The first-person perspective is actually kinda neat since it forces you to think around the 3D towers. Want to hit a satellite sitting behind a thick cement shield? You’ll need to pull the trajectory of the ball way up and give the firing mechanism just enough steam to crest and then hit behind the wall. You can also employ brute force tactics, but where’s the fun in that?

Within these physics-based mechanics is where the game falls apart. Bizango’s engine is stupidly unpredictable. It’s also prone to technical errors. I’ve run into issues with objects hanging in the air with no supports on several occasions. Also, balls can clip through barriers completely or take wild bounces off of supports and deal zero damage to what you hit initially. 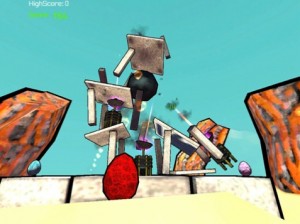 While I can take a bug or two under normal circumstances, these are catastrophic. The entire game is built around the core conceit that the physics engine is reliable and there just isn’t any actual reliability to be had. When the game introduces the egg (a breakable object that you’re tasked to save from calamity), this unpredictability causes way to many problems. It becomes almost unplayable.

I’m also having trouble sussing out what the puzzles want me to do. Bizango isn’t so great at telegraphing via design, which has led me into spirals of testing each individual little shot I take. A bit of direction isn’t a bad thing, especially when you’re laser-locked into first-person perspective and having to be brutally precise with the trajectories and angles of attack. On a positive note, the cel-shaded art direction displayed in its levels is pretty cool.

Bizango strikes me as a game that needed more time in the oven. When it works, it’s satisfying and scratches a new itch that I never knew I had, but the times when everything clicks are rare. Skip this one for the time being, but also take note that more and more independent developers are starting to dabble in UDK. I don’t know if this has anything to do with the significant royalty change or not, but it’s appear as if we’re finally hitting that influx of games we’ve been expecting.