Are you the kind of person who has such an extreme affinity to retro gaming that you’ve let your lust for games like Pac-Man and Galaga invade every aspect of your life, but you’ve often found yourself disappointed that they haven’t taken over your social media feeds? Well, Namco has the answer for you, and it’s not part of a twelve step program– It’s PAC’N TWIT [Free]. This free Twitter client does what most Twitter clients do in that it allows you to view your timeline, replies, direct messages, and all that jazz. It even has push notifications, which I was more than a little surprised to see implemented. 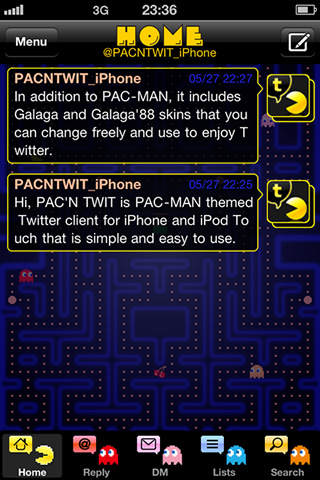 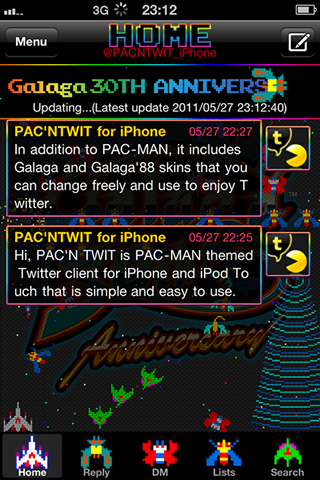 PAC’N TWIT also has some strange mini game integration. You can spin a roulette wheel based on the number of tweets you’ve posted, and winning rewards a puzzle piece to a… iPhone wallpaper. Each skin has its own associated wallpaper to unlock, and apparently aside from the two included Pac-Man skins and two included Galaga skins there are more on their way via updates.

It seems weird for Namco to dedicate resources to developing and releasing a Twitter client, but it was also pretty weird for Taito to release a whole mess of utilities like Space Invaders Calculator [99¢]. Myself, I’m a fan of Tweetbot [$2.99], although I suppose the one drawback that it has is a significant comparative lack of retro game skins.