Trouble Brothers’ Cargo Runners [$4.99] is a digital board game with basic issues that should have been ironed out prior to its release. Its tutorial is bad. Granted, it does a decent job in communicating major goals, but it fails in speaking to flow and strategy, which are constituent parts of the Ticket to Ride-meets-the-ocean-trading experience that Cargo Runners shoots for. Worse, it doesn’t feature a single-player mode — an option that would have made the learning curve a more bearable ordeal and also would have given you something to do with the game when by yourself and network-less. As it is, you’re expected to play and fumble exclusively in live environments. That’s not… ideal. And what’s killer is that Cargo Runners has all the makings of a good game, but it’s being held back by these odd shortcomings.

Cargo Runners revolves around making the most money in the shortest time frame. In a typical game, which supports up to four human players, you’re tasked with collecting four pieces of cargo that matches up with a need in a port on the world map. When a ticket is turned in, you receive the cash stated on the port’s contract. The not-so-subtle push and shove here is that other players might be vying for the same contract as you. If they collect it, you’re out of luck. 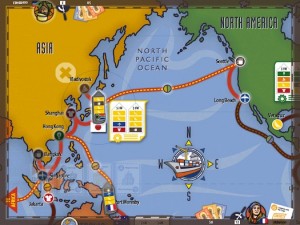 You roll dice to collect moves and cards, the latter of which adds a bit of spice. With cards, you can steal opponents’ cargo, as well as pick up extra pieces of cargo and even complete certain objectives. Each card has a different color differentiating its use. The blue and green ones, from what I gather, should be used every turn. The yellow ones are sort of the rough equivalent of a Wild Card in UNO. You want to hold on to it for a clip and use their trade route-blocking or contract-gathering powers at the right moment.

Figuring out when that right moment is, however, is an issue. This game dearly needs a better, more comprehensive, and an interactive tutorial that teaches you when to do things and how to think about the game. It’s hard to soak in game logic via live play. As with any board game, Lady Luck has a huge hand in a lot of game-side affairs, which can be especially trying when you’re flying blind.

What kills me about Cargo Runners is that it looks great and has legitimate entertainment value. It’s one of the sharpest, most cohesive digital board games in general, though I suppose that says more about the fact that Trouble Brothers’ created this version without a physical one to look at; the actual board game hasn’t materialized.

Most of our problems might be addressed in the future, provided enough people buy into this version of the game. 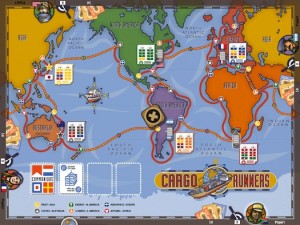 In a recent message board post, Trouble Bothers’ Jeff McCord said, “And yes, absolutely we too would love to have found a way to launch Cargo Runners with AI, but to do so would have been at the expense of one or more of the other critical priorities listed above. As soon as we start seeing income from the game it will help us to add other great new features, included AI (and or) solitaire play, as soon as we can.”

The studio is also sharing other thoughts with our community, so check out that thread if you’re into where the game might be going and what’s going to be addressed in the future. There is also a hefty amount of Wizard Hex [$2.99] talk, which, oddly enough was another Trouble Brothers’ pseudo-board game title that lacked a solid tutorial.

Cargo Runners‘ shortcomings are too big for us to give it an official recommendation, but we’ll happily follow this title as it morphs into something that represents a value and makes good on the promise that we’ve seen flashes of while playing with this version. That’s not to say there isn’t a shred of value in this specific version. If you’ve got a solid group of board game pals, for example, this is almost perfect for you.

Just as a little technical note here, the matchmaking system is slow, and worst case, doesn’t work. We’ve been getting server errors quite a bit, lately.