Ticket to Ride [$6.99] is a board game turned digital. It has no great pits to leap across, caves to plumb for loot, or monsters to bludgeon. It is, without a doubt, a traditional game that requires the old-fashioned stuff: deduction, tactics, and skill. It isn’t for people who want flash and glam; rather, it’s for people who can appreciate sharp, boiled-down design that presents compelling challenges without the mess.

Straight up: Ticket to Ride is good on the iPad, just as it’s always been good as a board game. The things the digitization brings to the table is the streamlining of setup — the end game counting of points, the piece setting, and the shuffling of cards — and online play against or with friends or even random dudes.

It’s not shocking, but it’s still weird how sterile Ticket to Ride is from a visual design standpoint. I can count the number of animations and UI elements on my fingers. The focus here is on the game itself, as it should be. But while it’s nice to not have to deal with clutter, the thriftiness also highlights the questionable decisions. 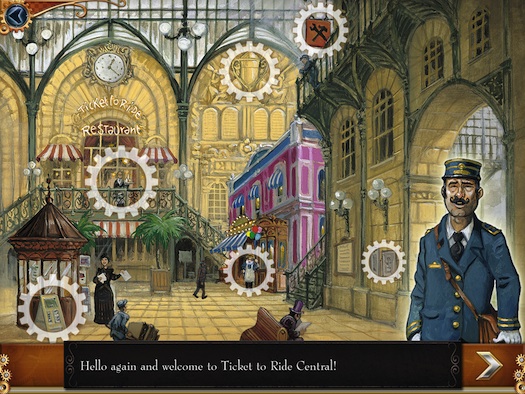 The main menu turned HUB world in particular sticks out like a tumor. There’s a quick start option and then there’s the train station that hosts the majority of content. Also, the lobbies for multiplayer feel too front-loaded with bits and pieces of needless UI.

That’s enough overheard gazing, probably. The meat of Ticket to Ride is delicious. Like other solid board games, its rules are the main attraction, the sticking point that guides all of the strategy and deduction. 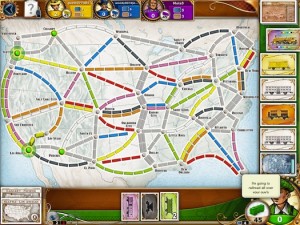 I fancy the contrast of this and Magic: The Gathering, the card game. In M:TG, success is often measured in how well you tap dance around the rules. Ticket to Ride is a regimented title in which you can only do one action per turn — even though you want, and can often do, much more given free reign. I think this bumping and grinding against Ticket to Ride’s rule set is the most enjoyable aspect; the game is teasing and challenging you at all times.

The point is to complete a railroad from one location to another. The initial phase has you being handed three location-to-location cards. If you manage to build that railroad on the card, you’ll earn the points listed on the card. The person with the highest score wins. 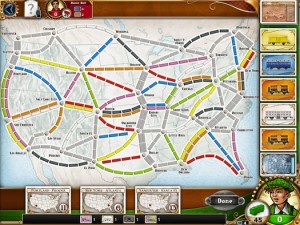 The rub is on the board. Certain tracks require a certain amount of colored train cars to fill in the track. In order to facilitate this, you’ll need to draw cards either from a shared pile or the random stack. After drawing cards, however, your turn is over.

If you set a piece or pieces on the map, your turn is also over. Or if you draw a new location card, your turn is over. You can’t mix and match; it’s one and done.

The overall strategy, I think, is tied to how and when you act. Do you set your pieces down as soon as possible before an opponent can tie up a track? But if you do, are you giving clues as to which cards and locations you’re trying to get to? Should you block a person instead? Or do you just sit around and draw cards until you can overtake the map?

The deduction and tactics aren’t subtle, but they’re still satisfying. Ticket to Ride requires a lot of foresight, critical thought, and even some reverse engineering if a person happens to screw all your plans with a surprise move. It’s fun and satisfying to do this and I think it needs to be noted that every game is different and presents its own challenges. 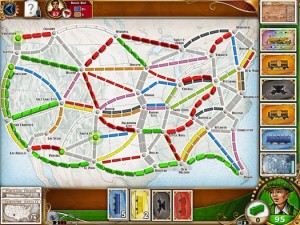 The AI, by the way, seems fairly sharp thus far. Human opponents, however, are where the real fun resides and the game does multiplayer without hitches. I was just in a four-person room and the game reacted well to the crowd, though stuttering was apparent.

This is such an overused phrase, but if you’re a fan of Ticket to Ride, or even its XBLA incarnation, you’ll dig this. Hell, if you’re looking for something in a similar vein to the other tremendous board games turned video games out there this will do just fine. Ticket to Ride is a sharp game that has all the charm of the board game minus a lot of mess. It is as challenging as you can make it and rarely unsatisfying.

NOTE: Ticket to Ride ships with just one map at the moment. You can purchase others through IAP by clicking on a vendor. Each is .99 cents, a steal considering the game is just $6.99 to begin with. Also, there is no pass and play.