One of my favorite iOS games of all time is the dungeon crawler Rogue Touch from ChronoSoft. Here at WWDC 2011, I had a chance to sit down with the man behind the games, Kevin Hill, to discuss the latest on that great classic adaptation as well as some of his upcoming titles, including roguelike / RPG Dungeon Tactics: Spirit Hunter Mineko, which we first mentioned back in March of last year.

First off, Rogue Touch will be getting a major update sometime in July as it moves from v1.6, which arrived last summer, to version 2.0. Kevin worked am impressive series of updates to the game in its early days, but none of them have brought nearly as drastic a set of enhancements as the coming update. 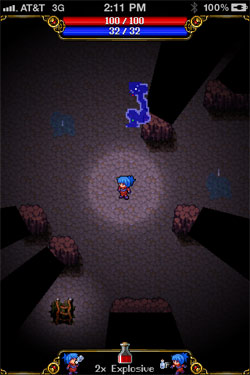 Rogue Touch v2.0 will bring an entirely new set of tiles and monsters with much greater detail than those of the current release. What’s more, the game will move to an OpenGL-based rendering engine (don’t worry — it’s still a 2D game), improving the visuals in several respects as compared to its current CoreGraphics-based engine. Game Center integration is also in the mix, as well as various, smaller tweaks and enhancements. I took a look at the tile and character sheets for Rogue Touch v2.0, and I can’t wait to make the upgrade.

The coming Rogue Touch update isn’t all that fans of the game have to look forward to. Rogue Touch EX is still on track to inject the dungeon crawler formula with a dose of arcade action. The game will feature pseudo real-time exploration, something akin to what we’ve seen in Solomon’s Keep. Rogue Touch EX is expected to arrive as a Universal application for both iPad and iPhone, with Retina display support on the latter.

The biggest news of all out of our meeting with ChronoSoft is the preview I was given of Hill’s upcoming Dungeon Tactics: Spirit Hunter Mineko. The game marries elements of the roguelike dungeon crawler with those of the traditional Japanese RPG. 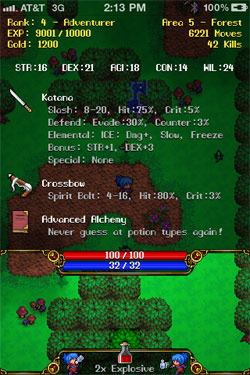 We detailed the backstory in our first look but, in short, the game is the adventure of Mineko, a teenage girl and Spirit Hunter who lives with her family in a remote, mountaintop village. One night during a magical and terrible storm, she and her fellow villagers see a menacing castle materialize out of nowhere. The village council decides that her brother should be sent to investigate this new evil and Mineko, never one to mope about the house, follows after him to help save her village.

Hill has made a number of design decisions aimed at keeping the game experience as accessible and uncluttered as possible. For example, movement is a simple swipe with two swipes for an action. Stairs are automatically ascended / descended when encountered. Tidy inventory and potion selection panes can be swiped in from above and below. The entire system feels rather streamlined.

The game features multiple environments including houses, sewers, cellars, caves, forests and castles as well as an active weather system and day and night modes. In addition to weapons and potions, there is a magic system handled via glyphs on a scroll that can slide in from the side of the screen. Additional side areas become available upon completion of the main mission, allowing some bonus post-victory dungeon crawling fun.

I had a chance to play an in-progress version of the game here at WWDC and it seems extremely well put together. Have a look at a brief video of the game in its current state.

We can expect Dungeon Tactics: Spirit Hunter Mineko to arrive sometime this fall. After that, it’s on to work on the next title for Hill, an as-yet unnamed, futuristic strategy game in the vein of Advanced Wars and Super Robot Wars. I took a look at the character sheets and they look quite promising.