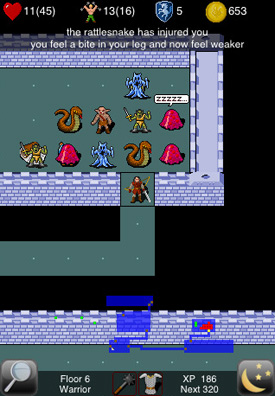 ChronoSoft has just released a significant update to Rogue Touch [App Store], it’s iPhone adaptation of the classic dungeon crawler Rogue.  In celebration of the v1.5 release, the developer is running a weekend sale (4/10/09 through 4/12/09) of the game, now priced at $0.99, down from $2.99.

According to the developer, aside from various new features, Rogue Touch v1.5 fixes most every reported gameplay and stability issue.

( Other tweaks, bug-fixes, and improvements are listed after the jump. )

Rogue Touch is really a dream-come-true for fans of the genre.  It’s an impressive adaptation of a true classic that has gained quite a following thanks to its solid implementation and the degree to which its developer, active forum member ‘CommanderData,’ has listened to the community and let their feedback shape the evolution of the title.

See our review of the game, posted back in February.

Inventory: Tweaks for handling your items and pack