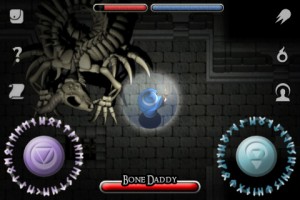 Solomon’s Keep is a casual dungeon crawler that places you in the role of Sirius, a student at wizard college who’s on the brink of graduation. For your final exam you’re tasked with defeating the evil wizard Solomon Dark. It utilizes a dual stick control system and plays a bit like a watered down Diablo, and it’s incredibly fun.

The dungeon itself is 10 floors high and is randomly generated with each new game. The enemies get tougher and increase in quantities as you ascend. There’s usually quite a few enemies onscreen at once, and they come after you much like the enemies do in Minigore. You can get swarmed if you aren’t constantly backpedaling in the available open space. Some of the enemies are stationary and fire at you from a distance with arrows, fireballs, or stun spells. There are two bosses to fight on the way to the final battle with Solomon on the tenth floor.

The combat with the enemies is pretty satisfying, mostly due to the interesting magical attacks at your disposal and all the different ways you can upgrade them. Your main weapons are magic missiles, fireballs and lightning. These are fired off in whatever direction you aim with the right stick. In addition you can equip up to two sub-abilities that range from large offensive attacks to strategic moves such as teleporting. When your character levels up, you’re randomly given 3 options for upgrades which can include increasing your offense in different ways or boosting stats such as life and mana. 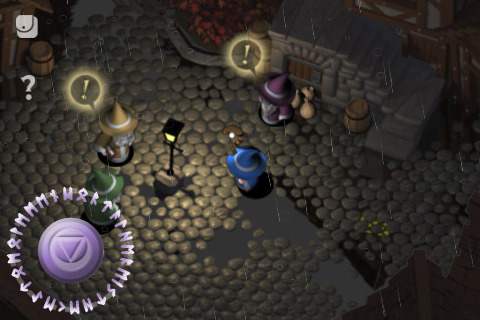 There are treasure chests spread throughout the dungeon that are filled with gold, and occasionally special items. You can travel back to town and spend your gold on things such as potions, rings, and staffs. Gold can be traded for experience points and also be used to upgrade some of your abilities without the need to level up. In your possession is a magic key that can transport you from the dungeon back into town at any time. Once you’re finished, it places you back into the dungeon right where you left off.

The only thing that really mars an otherwise great experience are the many technical problems currently present in the game. I’ve experienced lagging, freezing, and music/text glitches. There’s also an incredibly odd bug that has everything running in fast forward upon waking your device from sleep mode while the game is running. The developer has acknowledged the problems and is hoping to address them in updates. Even with these issues, the game never once lost any of my progress and the problem was always fixed by exiting the app and restarting.

Playing through Solomon’s Keep is a blast. It’s geared more towards the casual side, but that actually works to its benefit being on a mobile platform. If you’re the type that needs a ton of different kinds of armors and loot, and enjoy grinding, there’s a chance this type of game might not satisfy you. It can be beaten relatively quickly, and it’s a decently challenging ride, but with the amount of different attacks and upgrades available it’s impossible to do everything on just one trip through.

The game is so much fun you’ll want to go through it multiple times, which gives you a chance to expand your character in different ways each time. If the developer Raptisoft can squash the bugs that made it into this current version, as well as add a little diversity in the way of enemies and dungeon interiors, this can be one of the top dungeon crawlers on the app store. Even as it is now, Solomon’s Keep is still a highly entertaining game and is recommended.