It was back in October of last year that we first learned of Gears, a new ball rolling game from Mobile Game Garage that was set to get the extreme graphical makeover treatment from fellow iOS developer Crescent Moon Games. Not surprisingly, the before and after screens were quite astonishing, and Gears was shaping up to be quite a beautiful game. After a longer than anticipated development time, we finally got a trailer for Gears in early February followed by a hands-on gameplay video a couple of weeks later. And at long last, Gears [99¢] is finally available for download in the App Store.

First things first: Gears is gorgeous. Crescent Moon has worked some serious mojo on the graphics here, which are entirely rendered in 3D and utilize a fantasy/steampunk theme that suits the game well. Retina Display equipped devices will be treated to high resolution visuals, and there are additional special enhancements for the extra power of the iPad 2. Also, owners of older devices can choose from different levels of graphical quality to increase performance if need be. No matter which device you’re playing on, Gears looks spectacular with a ton of detail and impressive effects throughout. 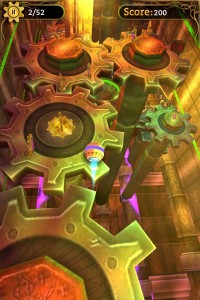 The campaign in Gears consists of 27 levels spread across 3 different themed worlds with 9 levels apiece. Each level has a set number of power gears to collect on your way to the finish. It’s not necessary to collect them all, though higher scores and thus better medals are awarded based on how many you do manage to pick up. The levels are all really well designed, and the type of terrain you must traverse is what really sets Gears apart from other ball rolling games. Levels are rife with moving gears (naturally), stairs, narrow bridges, trampolines, gates, exploding boxes, and various other obstacles that can impede your progress.

The first set of 9 levels won’t prove too much of a challenge, and in fact serve as a perfect introduction to playing the game without being a total cakewalk. In world 2 and beyond, however, the difficulty ramps up quite a bit. Thankfully this is handled beautifully with the ability to choose from 4 difficulty levels at any time during the campaign. 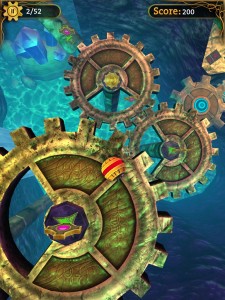 Easy is where I suggest starting from, as there is no time limit and you’re free to take as long as you need to reach the finish. Normal gives a generous time limit that allows for making some mistakes while still being able to complete it, and Hard gives you a stricter time limit that requires a fairly flawless run. All 3 of these difficulties give you unlimited lives and take advantage of the many checkpoints spread throughout every level, transporting you back to the last one that was triggered should you see your demise (which you will, a lot).

Then there’s Brutal difficulty, which is reserved for masochists only. Brutal gives you the same time limit as Hard but you only get 1 life, and rolling your ball off the path will result in having to start over from the beginning of the level. It certainly earns the title of Brutal difficulty, but playing on the harder difficulty settings will earn you additional bonus points at the end of a level which is key to earning high scores and competing on the Game Center leaderboards.

The number one thing that really stands out about Gears to me is the excellent touch controls. There are many ball rolling games in the App Store, most of them meant to be played with tilt controls. This makes sense due to the accelerometer and gyroscope capabilities of iOS devices, and Gears too has a completely competent tilt control system should you prefer using that. But touch controls are totally where it’s at. There’s never been a ball roller with touch controls this good, and once you’re comfortable with the nuance of them you’ll feel like you have solid control over your little shiny ball.

Gears is everything you would expect from a Crescent Moon release. It has fantastic production values, amazing graphics, brilliant controls, and a solid set of well designed levels to play through. What’s crazy is that they took something as simple as a ball rolling game and made it feel like something more. The difficulty might be a little much for your average gamer, but thanks to the Easy setting, it’s at least possible to complete the entire game with a little perseverance rather than limiting it to only the most hardcore and dedicated players.

Even if you’re not a fan of the ball rolling genre (which aside from the classic Marble Madness, I’m not) Gears is totally worth a look as it feels much different from what’s already out there. Players in our forums have been loving this one as well, and for the introductory price of 99¢ Gears is highly recommended.