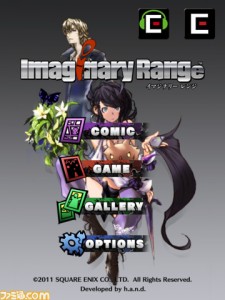 In more Square Enix news this morning, the company has updated the teaser site for their previously unknown upcoming game that we posted about a couple of weeks ago. The game is called Imaginary Range, and will be launching in Japan for free on May 5th. It doesn’t sound like your typical game, either.

Square Enix describes Imaginary Range as a “game comic”, which basically means it’s a digital comic book with interactive elements spread throughout. As you’re reading it, you may come across hidden items in some of the panels that relate to the overall story, or you may come to a scene that requires you to complete a mini-game in order to progress. They want this to appeal to people that are only interested in reading the story as well as gamers, so whatever gameplay elements it contains are of the simple variety that anybody can play.

According to Andriasang.com and some dodgy Google translating of an article posted at Famitsu.com, the story in Imaginary Range revolves around two characters named Sid and Sierra. A giant monster known as Ω (Omega) has attacked France, and Sid and Sierra head into the country to figure out who Omega is and the purpose of the attack. Despite having the same name, the Omega character doesn’t appear to have any correlation with Square Enix’s recently revealed Chaos Rings Omega.

Famitsu has also been granted access to the first screenshots of Imaginary Range, which you can see in the gallery below (click to enlarge):

While Imaginary Range does sound interesting, I’d be lying if I said I wasn’t a bit disappointed that it’s going to be more of an interactive comic book with light gaming elements rather than a full-fledged new game. Still, since the game will be free I’ll definitely be checking it out. Imaginary Range is slated to hit the iPhone, iPod touch, and iPad on May 5th, with an Android version coming later in the month. We’ll let you know if we hear word of a US release, which I’d imagine we’ll be seeing, and in the meantime there is a discussion for Imaginary Range in our forums.

[Via Famitsu and Andriasang]