Yesterday I posted some basic details and then followed that up with some additional impressions as I made my way to level 10. At some point during the night, Gameloft threw the switch to make the game available internationally. If you’ve been anxiously reading our preview coverage and forum thread, download Order & Chaos Online [$6.99] as soon as you can. 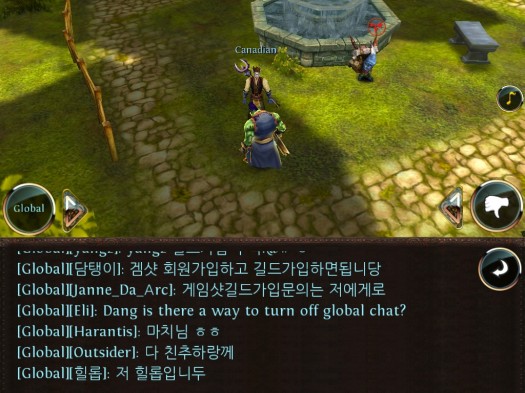 And as soon as you do, disable global chat for the love of all things true and decent. To do so, bring up the text entry and instead of tapping the “Global Chat" button to talk in that channel, holdit down until it is blocked. For whatever reason, Gameloft apparently hasn’t segregated servers at all, so Global chat is a mishmash of every language under the sun.

I’m not sure how much of a “review" I can even do for a game like Order & Chaos. I played basically all day yesterday, and I feel like I’ve barely scratched the surface. I’ve yet to really even make it outside of what feels like the starting area, and my talent trees haven’t even breached the second tier of skills. This seems like a massive game, and the TouchArcade guild chat seems to have unanimously agree that Order & Chaos Online is “as good as vanilla World of Warcraft." I’m not sure I’d go that far, but there certainly is absolutely nothing else like this available on the App Store.

With that being said, as I mentioned in a previous post, Order & Chaos is definitely textbook Gameloft. They cloned the art, gameplay, and everything else that matters while leaving out a lot of the “soul" (for lack of a better way to put it) that Blizzard always has in their games. It’s technically competent, but at times it feels like you’re just going through the motions of an MMO, doing kill quests and running around while not really being invested in the game world itself. I’ve yet to really even come across anything I’d describe as “lore," which could be a fairly negative thing in the eyes of many. 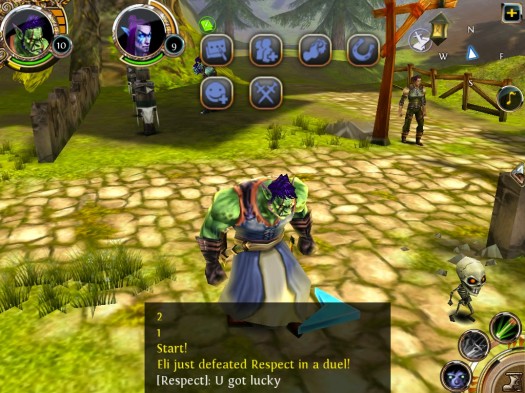 There’s also the legitimate concern that Gameloft might not keep Order & Chaos fresh with updates. A vital part of any MMO is a constant stream of content for your subscribers to play through, and Gameloft hasn’t exactly had the best track record when it comes to providing additional content to their games at all. Without a fairly functional crystal ball, it’s hard to say if this will ring true for Order & Chaos or not. Also, the WiFi-only limitation sucks. The game works just fine for jailbroken users with 3G Unrestrictor, and not being able to play on the go with my 3G iPad is seriously a drag.

Anyway, what I do know is I’ve been having a blast with the game. It’s been scratching the eternal itch I’ve had for a WoW-like MMO on my iPad, and the fact that the client is universal is just icing on the cake. The TouchArcade guild seems to be having a blast too. Speaking of which, let’s see if we can just take over the Arcadian Forest server. I was actively recruiting today for the TouchArcade guild, but it hit the 60 character limit in about 45 minutes… So we’re going to need to make other arrangements. If you’re a guildmaster looking for players, stop by this thread. Alternatively, if you’re a player looking for a guild, feel free to post here.

Order & Chaos comes with free 3 month subscription, following that subscriptions are 99¢ for one month, $1.99 for three months, and $2.99 for six months.