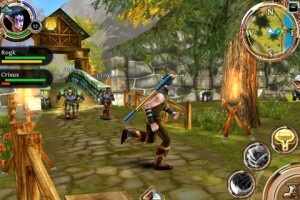 At some point early this morning, Gameloft released their MMORPG Order & Chaos Online on to the Canadian App Store, which seems to be standard operating procedure for a wide-scale “beta" of sorts. Ngmoco and other similar developers all have used the Canadian market to test out how their servers are running and how the game is performing, so it isn’t out of the ordinary by any stretch of the imagination to see Gameloft doing something similar.

I’ve downloaded the game and put around an hour of playtime into it so far, and in the process discovered quite a few of the things we were wondering from the trailers Gameloft previously released. First off, the game isn’t freemium which may be a relief for some. It’s launching at $6.99, which includes three months worth of subscription to the game. Following that, you can subscribe for a single month for 99¢, three months for $1.99, or six months for $2.99. 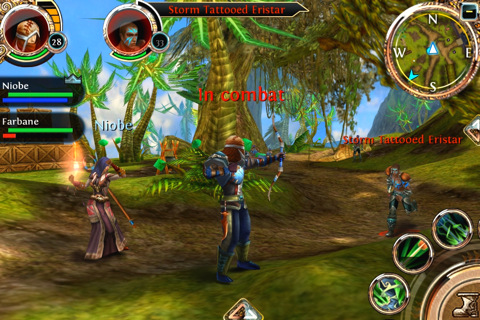 There are four playable races. Humans and elves are on the “order" side, and orcs and undead are on the “chaos" side. These races look remarkably similar to World of Warcraft, and as of right now four basic classes are included: Warriors, mages, monks, and rangers. Each class also seems to have two talent trees to invest points in. For instance, my ranger can specialize in being an “archer" or an “assassin".

In the hour I’ve played I’ve barely scratched the surface of the game, and most of my time has been spent completing basic kill quests and running around trying to get my bearings. One thing that’s very nice about Order & Chaos is that there’s an arrow you can enable or disable to always point you in the direction you need to go for the next quest, and a great map system hasn’t allowed me to get lost anywhere. 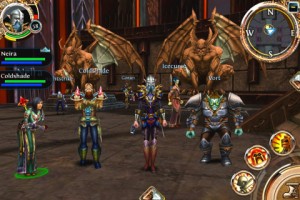 Order & Chaos also features two different types of IAP. Runes can be purchased in differently sized packs and then spent on things like vanity pets and what appear to be high-end crafting items or enchantments. Gold can also be bought, but according to the Order & Chaos thread in our forums it can also be earned in game. So far the only thing I’ve come across that specifically requires a gold piece is increasing the size of my inventory.

As mentioned, I’m only around an hour into the game so far and it isn’t immediately apparent how much any of these IAP items are needed. Every quest rewards money, although I’m far too low level right now to see if that money does in fact add up to the same gold pieces you can buy. I’m going to keep at it though, and will update this story as I hit any walls that require IAP.

All in all, Order & Chaos seems like the real deal, it’s a great effort by Gameloft and a surprisingly accurate, although substantially toned down, clone of World of Warcraft. I’m curious to see how the whole order and chaos factions eventually play in, as I was able to create two characters on different factions on the same server. The terms of use does have all kinds of provisions for player vs player combat, I just haven’t found it yet.

Anyway, if you’re a Canadian or a “Canadian," give Order & Chaos a shot. I’m fairly impressed so far, although I wish it worked over 3G. Requiring WiFi is a drag, especially since my iPad tethered via 3G seems to work flawlessly while playing the game. If you’re creating characters, do so on the Arcadian Forest server, that way we can all play together.

And of course, we have no word when this game will actually see an international release. Historically though, when developers release things in Canada they’re just doing final testing to make sure their infrastructure is working. We could see Order & Chaos Online is the rest of the world as early as this Thursday.