Back in January at a Capcom preview event, I was able to get some hands-on time with Resident Evil Mercenaries VS [$2.99], a new multiplayer focused entry in the Resident Evil mobile series. During that preview, I could see that there was some potential fun that could be had battling it out with other players Resident Evil style, but was left with many reservations. The game’s performance was pretty atrocious, and it was slated to only ship with 2 playable characters and 1 multiplayer map. Even with the potential of the actual gameplay, these shortcomings left me doubting how the game would turn out.

Yesterday, Resident Evil Mercenaries VS was released in the App Store, a little more than a month after originally planned. The good news is that the extra development time went to fixing some of the problems I saw in the preview version, tightening up the performance a great deal and adding a 3rd playable character and 2 additional multiplayer maps to the game. The bad news is that even those additions can’t really overcome the poor presentation and mundane gameplay of the title. 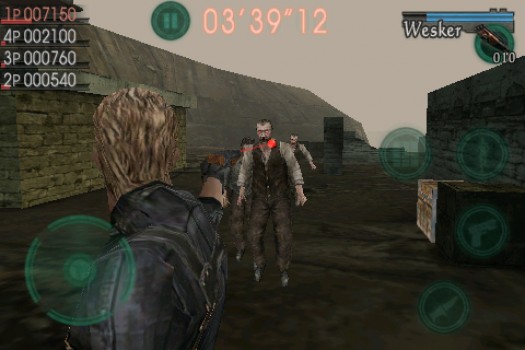 Let’s get one thing out of the way first: Resident Evil Mercenaries VS is not a pretty title. The character models look halfway decent, but the entire game has a grainy, low resolution look to it that is full of jagged edges and a muddy color palette. These graphics may have been impressive a few years ago, but they don’t come close to cutting it in this day and age of iOS visuals.

Looking past the graphics, the game controls very well, utilizing the same scheme as the other Resident Evil iOS titles currently in the App Store. A control stick for movement and a set of context sensitive buttons for performing every action, along with a handy quick inventory for using items and switching weapons. The problem is that the Resident Evil style of gameplay just doesn’t suit what should be a fast paced multiplayer battle. Having to stop moving in order to enter an aiming mode, and then line up your shot on an enemy is an exercise in frustration as the other players and AI-controlled enemies that inhabit each level lay waste to you.

On the good side of things, the game does run relatively lag free while online. There’s even a single player component that lets you play the 4 player free-for-all or team battle modes with AI bots. The mode I had the most fun with was ironically not a versus mode at all, but rather the coin hunt game where you seek out and shoot 15 hidden coins in any of the 3 levels within a certain time limit, with your final score uploaded to a Game Center leaderboard. Even still, I don’t think this is enough to warrant recommending the game when what should be the star feature – the online multiplayer – is so sub-par.

With enough practice, some people may warm up to the style of multiplayer battling in Resident Evil Mercenaries VS, but with so many far superior online multiplayer experiences on iOS already it doesn’t seem worth the effort.