Professional wrestling is fake, but it has one thing going for it: its steroid-engorged entertainment is unique content. The same can’t be said for WWE Superstars Sling Shot [$1.99]. It’s one of the most aggressive Angry Birds clones out there, substituting barrel-chested men for exotic birds, and steel girders and massive dumpsters in place of concrete slabs.

What makes it a recommendable purchase and soothes some of the scorn it deserves for copping from Rovio Mobile is, strangely, what sells the TV shows — all those oddities of the brand that cut through the canvas-draped treachery: the stars, the attitude, and the sheer amount of content contained within. 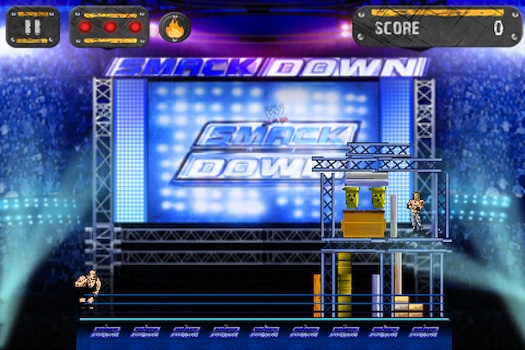 I know it’s hard to picture men built like Adonis catapulting themselves into elaborate objects composed of girders, trashcans, blocks of wood, and barrels, but this is exactly what the game has you do. Inside a themed ring, you take a WWE star, pull him into the ring’s ropes, and then let him fly into a pile of stuff. The immediate goal is to obliterate the opposing wrestler contained within the pile. The larger goal — and I kid you not here — is to win the WWE championship belt by doing this across a bunch of events.

For the most part, the physics of the objects react like a meatier version of Angry Bird’s physics; they’re stiffer and tough like the man-beasts you’re flinging. I find this layer of starch applied to the objects much more appealing, actually, and you might too if you’re not a fan of the loosey-goosey stuff that goes on in Angry Birds. 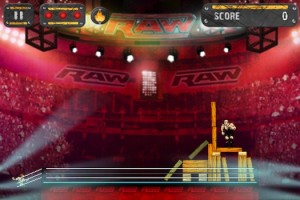 The Big Show, HHH, John Cena, The Undertaker and other similar stars are indeed in Sling Shot, bringing their specific body types and attitudes to the man-versus-trash pile conflict presented within. Oddly, they don’t have different attributes. The Big Show, for example, is a massive dude. You’d figure he would have more power than, say, a Rey Mysterio, who would undoubtedly be a high-flier with less dumpster-busting strength. Seems like an obvious direction to go in, right? I still, though, fall on the side that they’re good additions regardless of this: at the very least, fans will get their fill.

All in all, there’s over 100 different levels spread across 15 events, which is what really sells this game to me. Sure, there are some stinkers within the 130 or so levels, but the vast majority of the content is fun, and unlike Angry Birds, no luck is required. If you can hit where the weak spot on a given construction is, you can beat the level. Again, the physics here aren’t as wonky; Sling Shot is predictable for the most part.

And updated and connected, too, showing that the WWE is at least trying to get behind the product for the long haul. I’ve got zero information on possible level-adding updates, but I can’t imagine they’re far behind: look at how much Rovio added to Angry Birds.

So, if you’re a fan of WWE and its brand of muscle-bound entertainment or just a dude tweaking over the lack of Angry Birds content, I’d say go ahead and give this one a go. I dug it and I’m the kind of guy who often rolls his eyes at Angry Birds references. Just keep in mind that it’s not the most original thing on the planet and its operating under a different set of physics rules. Also, the WWE didn’t reinvent the wheel here; it just stuck a syringe in its axel and pumped the plunger.