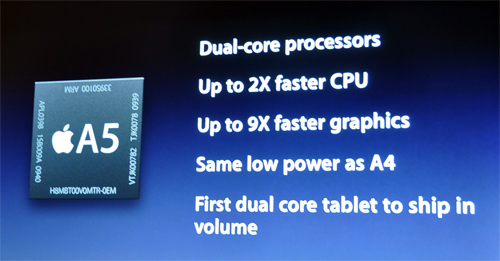 On Thursday, prior to the launch of the iPad 2, we posted a look at some early numbers from a suite of benchmarks run on a pre-launch iPad 2 media unit. These included a custom benchmark written by Guy English to gauge the graphics performance of an iOS device, which showed Apple’s new tablet to boast a dramatically improved fill-rate as compared to the original iPad.

Since then, we’ve seen the iPad 2 land in stores and additional performance reports start to surface, now that folks can get their hands on one. One such report was posted by AnandTech who has put the iPad 2’s graphics processor through its paces using GLBenchmark 2.0, an application written to gauge OpenGL ES 2.0 performance. They are also indicating that Apple’s new A5 system-on-a-chip contains a dual-core configuration of Imagination Technologies’ graphics processor, the PowerVR SGX543MP2, which comes as no surprise.

Architecturally the 543MP2 has more than twice the compute horsepower of the SGX 535 used in Apple’s A4. Each shader pipeline can execute twice the number of instructions per clock as the SGX 535, and then there are four times as many pipes in an SGX 543MP2 as there are in a 535.

The full report of the benchmark results can be seen over at AnandTech, but I’ve compiled the key numbers for quick review, below.

As you can see by the results, the iPad 2 markedly outperforms both the original iPad as well as Motorola’s new Android-based Xoom tablet with its Nvidia Tegra 2 chipset. GLBenchmark shows it moving nearly 5x the number of triangles per second as the iPad and fetching textures nearly 7x faster than the Xoom. Truly impressive results.

Coinciding with the launch of the iPad 2, we’ve seen a number of developers release updates to their titles that take advantage of the new device’s muscle. (And, most every existing title is benefitting from the extra horsepower as well, we’re seeing.) But, really, it’s going to take some time before we see the power of the iPad 2’s A5 truly exploited, as developers have a chance to really test the limits of the new hardware and craft titles that are dramatically more complex than anything we’ve yet seen in the App Store.

And, of course, we’ll keep you posted.