It was only yesterday that we were discussing the possibility of Square Enix bringing Final Fantasy III to the App Store. I had a blast with both Final Fantasy [$8.99] and Final Fantasy II [$8.99], so this was incredibly exciting news for me. Video game announcements like this can sometimes seem to move at a glacial pace between when they’re rumored or leaked and when they’re finally confirmed. Needless to say, I was very surprised to wake up to the following tweet today by Square Enix: 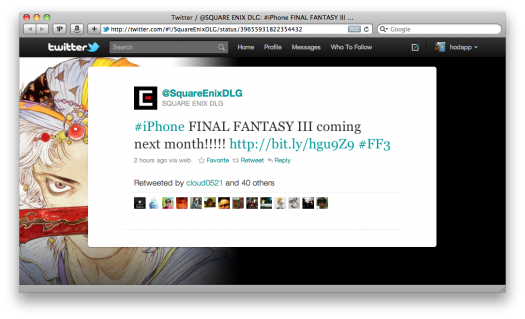 Unfortunately, this is where all the confirmed details we have about this particular game end. Following the link from the tweet just takes you to a basic splash page with the Final Fantasy theme. I wish we had some more to go off here, but I suppose I’m happy we’ve at least got a confirmation, especially so quickly. I can’t wait to spend hours upon hours on this game.