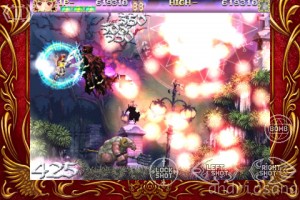 “Once more, the angels descend upon Gilverado…"

On Friday we reported that Cave announced that their 2007 arcade danmaku / bullet hell shooter DeathSmiles, which made its way to the Xbox 360 in 2009, would be coming to the iPhone this Spring. The studio has followed up with a press release providing additional details as well as a trailer video showing the action to come.

Enter the world of Gilverado, a kingdom plagued by hideous monsters and tortured souls. Choose from four angels with unique demonic familiars and battle against a storm of enemies pouring out of Hell’s gates! Fight your way out of tight spots as you are surrounded by enemy units and bullets from both sides of the screen. The unique left and right shooting mechanic of Deathsmiles will keep you on your toes as you dodge and weave through complex enemy fire, beautifully crafted by the modern masters of shmups, CAVE.

DeathSmiles is a side-scrolling, gothic horror-styled shooter that sends hosts of enemies your way from all four sides of the screen, delivering highly intense onscreen action. It offers a choice of the order in which its various stages are tackled as well as of the character you play: Windia, “the foppish English girl;" Casper, “the sassy German;" Follett, “the cautious French girl;" or Rosa, “the California valley girl."

Cave has also announced that their excellent Mushihimesama Bug Panic [App Store] will receive an update in March bringing Bluetooth and 3G/WiFi multiplayer, a choice to turn the Autobomb feature on or off, a choice of Attack Modes (lock or direct), as well as an update to the “lite" version [link], enabling players to play through all stages in the first world and also the Score Attack Mode.

Cave, who has produced 48 danmaku shooters over the past 16 years, has recently been recognized as “the most prolific developer of danmaku shooters" by the 2011 Guinness Book of World Records: Gamer’s Edition.