According to a post in our forums, Japanese blog Esuteru (はちま起稿) has obtained a scanned image from V-Jump magazine which claims that Square Enix is readying a port of Final Fantasy III for iOS in addition to their already announced Final Fantasy Tactics: The War of the Lions port which is due sometime this Spring. This is exciting news to say the least, but unfortunately I don’t read Japanese and therefore am left with quite a few questions.

First of all, the announcement of Final Fantasy III refers to a Japanese release, so even if it is officially in the works there’s no guarantee that it will also come to the US. Given the success Square Enix has seen with their iOS Final Fantasy games stateside, I’d imagine that it will, but it would be nice to know for sure. Also, it isn’t clear which version of Final Fantasy III would be ported. It was originally a Japanese NES game that wasn’t released in the US until the 2006 Nintendo DS 3D remake. It could be a direct port of the NES title, a port of the DS version, or something entirely different. 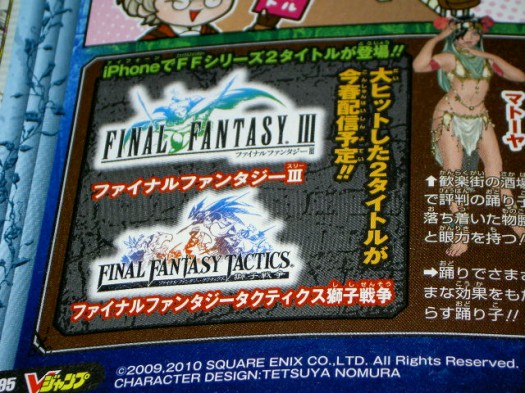 It’s important to remember that the Final Fantasy III that most Americans have fond memories of on the Super Nintendo is actually Final Fantasy VI in Japan, so don’t get your hopes up if that’s the version you’re envisioning for this release. I never played the original Final Fantasy III on NES, but I did really enjoy the DS remake from a few years ago. I would hope that if Square Enix does release a version for iOS that it would be based off of this version, or at the very least an enhanced 2D version along the same lines of their Final Fantasy [$8.99] and Final Fantasy II [$8.99] releases on iOS.

There’s a thread in our forums where discussion of this possible upcoming game is taking place, and we’ll of course bring you any new information regarding official confirmation of Final Fantasy III for iOS from Square Enix just as soon as we get it.

(Thanks to Joystiq and Siliconera for bringing the post in our forums to our attention!)