Yesterday, Telltale Games held an event in San Francisco where they announced a slew of new titles for this coming year. The main focus of this event was to offer hands-on time with the console versions of their upcoming Jurassic Park game (which looks fabulous, by the way), so unfortunately there wasn’t anything actually running on iOS devices that isn’t available already in the App Store. Still, there were some pretty exciting games announced, and as we march closer to events like Comic-Con and E3 we’ll start to see more tangible bit from these games. 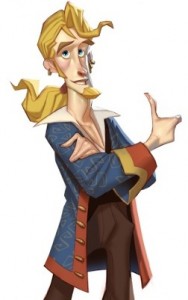 Monkey Island Tales 2-5 – Back in December, Telltale launched Monkey Island Tales 1 HD [$6.99], the first episode in their Tales of Monkey Island series reboot. Like its PC, Mac, and console counterparts, the iPad version of Tales was well received by customers and critics alike. We awarded the game 4.5 stars in our review, and named it one of the Best iPad Games of 2010. So not surprisingly, we’ll be seeing the remaining 4 episodes of Monkey Island Tales trickle out onto the iPad over the coming months. Beginning in March we’ll see part 2, and if everything runs smoothly with Apple’s approval blessings, we’ll see the remaining episodes released by May.

The Walking Dead – The incredibly popular graphic novel series that was turned into a hit television show is now being adapted for the video game realm. Telltale has inked a deal with series creator Robert Kirkman to bring The Walking Dead to just about every gaming space imaginable, with multiple titles planned to span across the next few years. There’s really no solid information about what the games will entail, but Telltale CEO Dan Connors promises that fans of the franchise will be really excited by how Telltale delivers such a rich story in video game form. Expect a lot more about The Walking Dead games when this year’s Comic-Con rolls around. Hector: Badge of Carnage Series – Last June saw the release of Hector: Badge of Carnage Ep 1 [$3.99] for iPhone and iPod touch. Hector: Badge of Carnage is a modernized point and click adventure game that is full of raunchy dialogue, adult themes, and satisfying gameplay. We really liked Hector in our review, only noting that it was a fairly brief game with a cliffhanger of an ending, and we couldn’t wait to see what happens in subsequent episodes. When we interviewed Kevin Beimers from Straandlooper (the creators of Hector) last year at WWDC, we learned that Episode 1 was in the works for the iPad and that Episode 2 production had begun as well, though with their somewhat small team and the nature of hand-drawn animation it might take a while before we saw more from Hector.

Yesterday, Telltale Games announced they have partnered with Straandlooper to help bring the Hector series to complete fruition. Since point and click adventure games, episodic content, and digital distribution are all things that are synonymous with Telltale Games’ core beliefs, the Hector series seems a naturally fit for them. The first order of business is getting Episode 1 on the iPad, as well as PC and Mac, this Spring. By the end of the year we should be seeing Episodes 2 & 3 on iPhone, iPad, PC and Mac. I know I’m not alone in being excited to hear more from the Hector series, and I really can’t wait to check out the future episodes. We’ll let you know when Hector: Badge of Carnage Ep 1 drops on the iPad, and bring you any further information on the new episodes as soon as we get it.

Puzzle Agent 2 – With the surprise success of Puzzle Agent after it released on PC and Mac last June, and on the App Store with an iPhone version [$4.99/Lite] and iPad version [$6.99/Lite], it’s not surprising to see that a sequel will be coming. But just because I’m not surprised doesn’t mean I’m not incredibly excited. We really liked the iOS version of Puzzle Agent when we reviewed it in September, and the game’s story ended in a way that left us wanting more. I’m a huge fan of Graham Annable who did the artwork for Puzzle Agent, and I loved the dark humor in the game. There aren’t too many details about Puzzle Agent 2 other than it will be coming this Summer, but check out this teaser video to whet your appetite a bit:

There are some other odds and ends to note from yesterday’s event. Of course the Jurassic Park game is looking fantastic, but is currently only officially announced for Mac and PC. Telltale notes that it is planned for other platforms, but didn’t get into specifics. Based on their history though, it’s pretty safe to assume that this 5 part episodic game will appear on the iPad at some point, much like Back to the Future has. Telltale also announced another comic partnership with the Fables IP, but again no specific details were laid out for this and we’ll definitely hear more come Comic-Con time. Finally, they briefly announced that their classic King’s Quest franchise will be receiving a reboot similar to that of the Monkey Island series. As a huge fan of both King’s Quest and Space Quest as a kid, I’m really excited for this announcement, and we’ll bring you any solid information on this as it becomes available.

As you can see, Telltale Games will be mighty busy in 2011, and a lot of that should result in some exciting iOS titles. You can check out our Upcoming iPhone/iPod touch and Upcoming iPad sections in our forum where our members will likely be discussing these future games, and we’ll keep you updated on new information about these titles throughout the year.