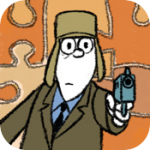 A couple of weeks ago, we had a chance to get some hands-on time with the iPhone and iPad version of Puzzle Agent from Telltale Games. The story of FBI puzzle detective Nelson Tethers was coming together nicely for the iOS devices, and now the game is finally available. Puzzle Agent succeeds beautifully in the art style and story departments, but falls a little flat with the actual gameplay offered. If you go into Puzzle Agent expecting a robust puzzle game with a lot of content and replayability, you’ll likely be disappointed. However, if you’re looking for an excellent mystery to solve with humorous characters and an interesting plot, you’ll find a lot to enjoy about the overall experience of Puzzle Agent.

The game starts with Nelson sitting at his desk in the FBI headquarters. You can tell he doesn’t see a whole lot of action, as he is surprised to receive a phone call asking him to go on an assignment in the field. The eraser factory in Scoggins, Minnesota has ceased production, and thus been unable to supply the White House with their required allotment of erasers. All inquiries as to what the problem is at the eraser factory have resulted in odd puzzle-related responses from the townsfolk in Scoggins, making Nelson the perfect candidate to have investigate the situation. You’ll travel to Scoggins to question people, solve puzzles, and uncover a twisted tale of what has gone awry at the eraser factory. 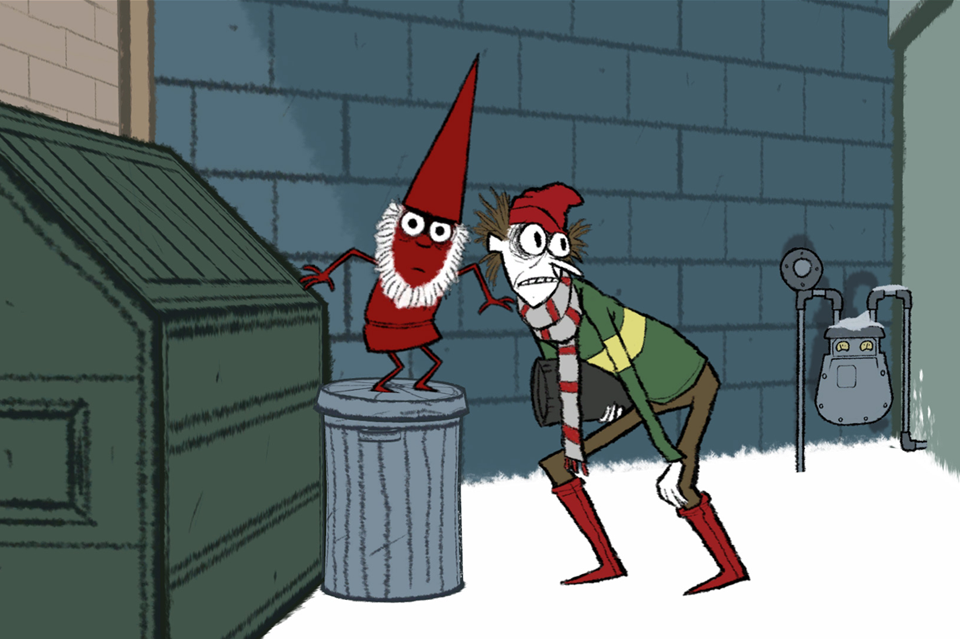 Puzzle Agent functions similar to other point-and-click adventure games, giving you a scene with various interactive elements to investigate. A circle will emanate from wherever you touch on the screen, and an icon will show up within that circle if something can be interacted with. I love this mechanic as it allows me to easily check an entire area for clues without tapping on every square inch of the screen. Talking with characters in the game is definitely the high point of Puzzle Agent. Each character is fully voiced and has multiple points of conversation to engage in. The amount of personality and humor that the characters exude through the dialogue is phenomenal, and playing through Puzzle Agent is analogous to watching a well crafted animated film. The art style is also very pleasing, featuring the minimalist hand drawn style of Graham Annable who created the Grickle comics and animated shorts. 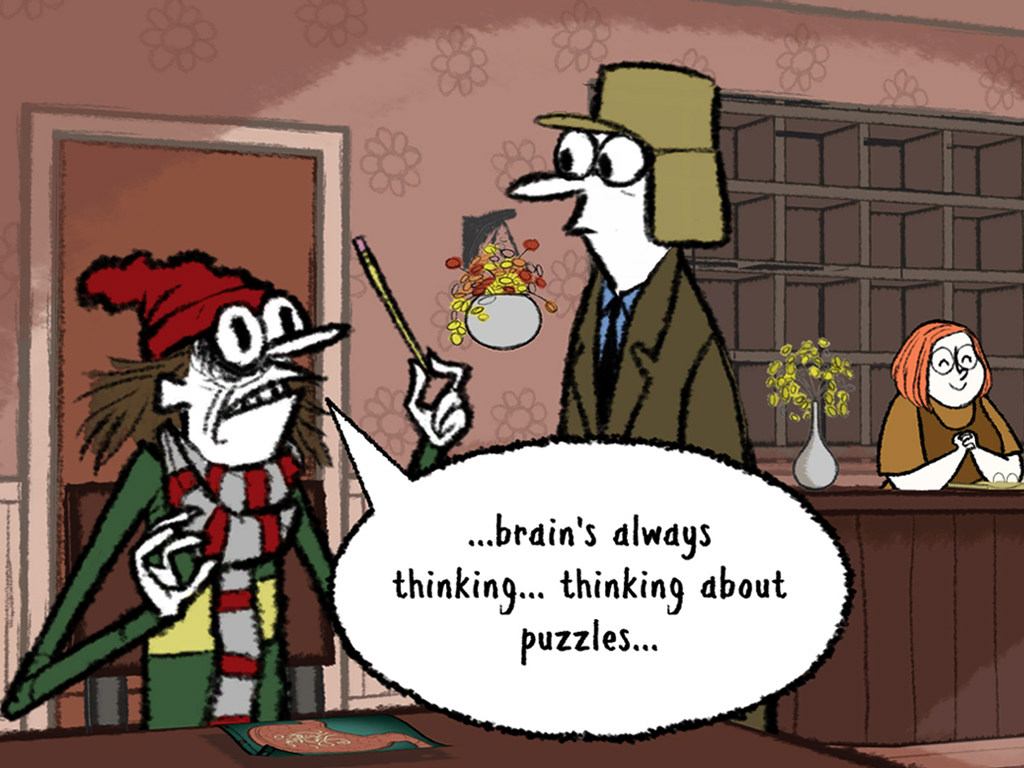 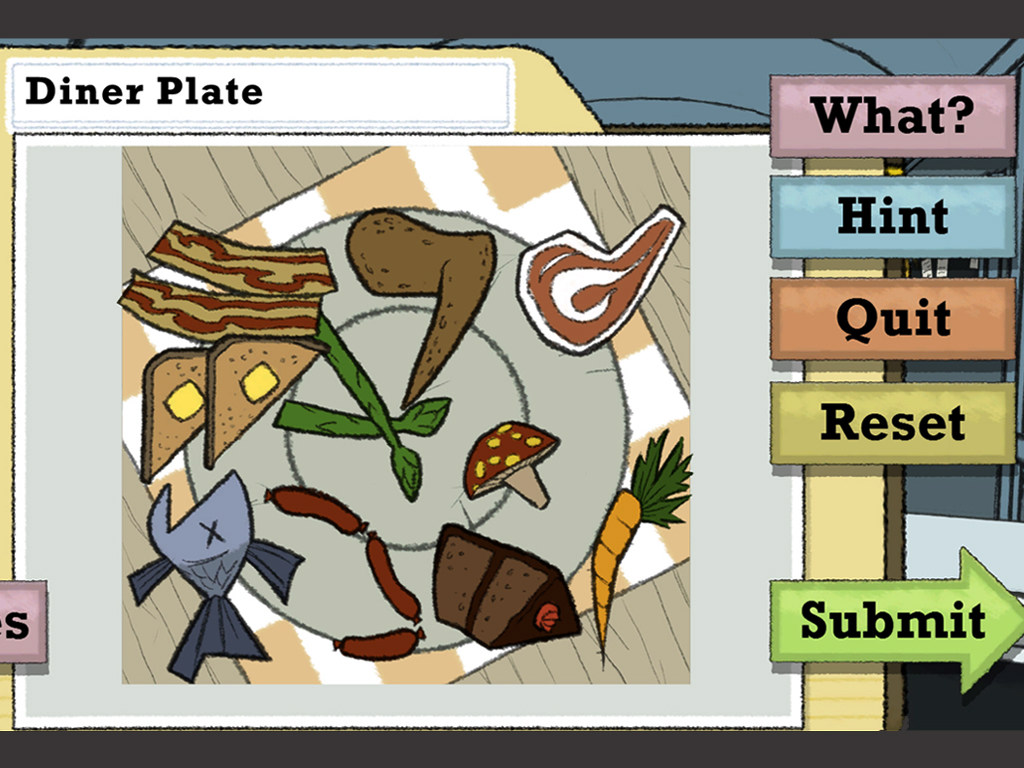 The actual puzzles you’ll be solving in Puzzle Agent are a mixed bag. Some are interesting, intuitive, and fun while others are just plain awkward and frustrating. Many times it’s just not clear what you are supposed to be doing in a given puzzle. A hint system is in place in case you get stuck, so it never really prevents you from progressing, but it can be annoying to spend time trying to solve a difficult puzzle with trial and error when you are immersed in the story. Another frustration with Puzzle Agent is the controls. The game is designed very well for touch screen, but the actual responsiveness when touching or dragging items is not so great. It feels like the game is optimized for the mouse and cursor of the Mac/PC version, and using the larger surface of a fingertip doesn’t afford the precision needed to perform some of the basic actions in the game.

There also isn’t much reason to go back and play the game once you’ve beaten it, as the puzzles and story don’t change. One important point to bring up is that Puzzle Agent looks far better on the iPad than it does on the iPhone. Many of the textures are blurry and show signs of artifacting, and are a far cry from the App Store screen shots that look like they are optimized for Retina Display.  This leads me to believe that it’s just a bug with the release version that doesn’t allow it to display the game in the proper resolution, although I have yet to confirm this. It doesn’t completely ruin the game, but it is a significant distraction. The iPad version doesn’t seem to exhibit this problem, and hopefully the issue gets rectified with the iPhone version soon.

Even with these issues, Puzzle Agent is still a really enjoyable experience. And that’s what it really boils down to – it’s better served as an exceptional entertainment experience rather than an exceptional game. The art style, music, voice acting, and story are incredibly well done, but the controls and puzzles are pretty hit and miss. If you’re looking for something akin to an enjoyable interactive movie, Puzzle Agent serves this purpose really well.

Update: We’ve been in contact with Telltale games and the artifact problem with the textures is indeed a bug. The dev team is away at PAX this week, and so will be looking into a fix for the problem next week and rolling out an update as soon as possible.