In 2009, Telltale Games resurrected the Monkey Island series with the first Tales of Monkey Island, a classic point-and-click adventure game. Since then, original Monkey Island creator LucasArts has started rereleasing Monkey Island classics and Telltale has finished its series based on the highly-regarded IP. Both series’ (including the rereleases) are successes, so it’s only natural that we’re seeing them on the iOS.

The first Tales game, Launch of the Screaming Narwhale [$6.99], just hit the App Store for the iPad yesterday, actually. And like its’ PC and Mac brethren, it successfully combines all the wit, the character, whimsy, and braininess of its SCUMM forerunners.

But I often think that Telltale’s greatest accomplishment in Launch of the Screaming Narwhal specifically is that it manages to make you feel like the franchise never died. It starts at the end of a game that was never made with an inventory filled with exotic items and dialogue that references adventures that we’ll never see. Telltale pulls this off smoothly with reverence and an informed idea of what the MI series is. 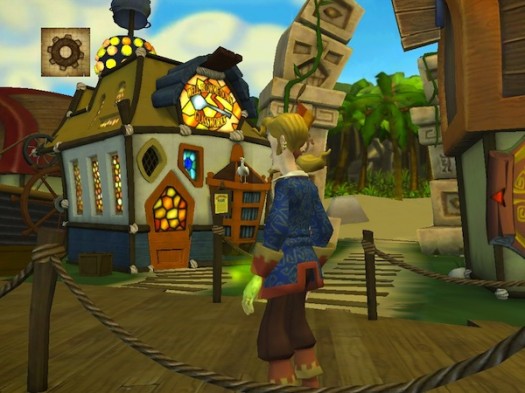 There’s a careful balancing act going on in Narwhal. On one side of the proverbial scale are character and the accoutrements of the MI franchise. On the other end of the scale are the game mechanics and systems — all of the stuff that makes the game spring to life, work, and operate as a logic-focused puzzle game.

To Telltale’s credit, it manages to balance this stuff pretty well. The puzzles are fun and original and the logic fueling them are often bursting with MI-typical absurdity and wit. Of course, there are problems with this puzzle formula inherently; game-side logic is often frustrating because it’s not conventional. Take, for example, the lighting of a bomb, which requires not a match, but an actual full-on open flame. Ridiculous. However, once you get a handle on how the game wants you to think about combining items or flat-out using them, you’ll do just fine within the its confines and have a good time — at least, you’ll never look at a flower pot in the same way, that’s for sure. And as far as the game world and systems are concerned, they mesh well with all of this, complimenting the absurd puzzles and providing few hindrances to the experience, which overall, is pretty damn well-written and goofy. 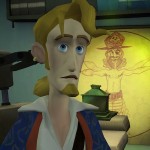 In Narhwhal, You control loveable buffoon Guybrush Threepwood, a man who thinks he’s a pirate and often stumbles into situations that make him seem like he’s an actual pirate. In this iOS version of the game, you scoot him around by pressing onto the screen and activating a virtual joystick that allows for three-dimensional movement. You can also click an interactive object and he’ll automatically move to it.

Item combination and item management are bigger deals than movement, and these key components translate well to a touch screen. On the right-hand side a giant bit of UI activates an item screen where you can click and drag to combine, equip, and examine your loot.

This all works well for the most part, but there’s a couple of catches. The Jungle Puzzle, for example, will make you want for more precision as you crawl to maze exits in an attempt to pick the right one. While timed puzzles, like the Boarding Puzzle, will undoubtedly have you desiring a snappier interface. I want to be real clear here and note that these puzzles are do-able. My point is that the UI is sluggish and movement wasn’t made a priority. And for further clarification, I’ve yet to spot problems on the scale of Sam & Max Episode 1: The Penal Zone for iPad [$4.99] yet.

On the technical side, Narwhal for iOS looks like a medium resolution port of the other versions of the game. Textures are rich, vibrant and as detailed as the game’s aging engine allows. This isn’t blow-your-mind quality stuff, and really, it doesn’t need to be. The game’s bubbly art style reflects the tone and captures the spirit of the game so well that you won’t be desiring more. I’ll note that you’ll encounter a few visual oddities here and there, as well as some slow down, but I think you can suffer through it. 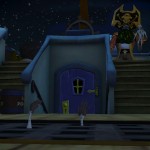 In large part, you can deal with this stuff because the world is so rich. Characters don’t have real depth, sure, but each dweller you’ll meet has a quirk and a touch of wit and absurdity that mirrors the game’s vibrant, offbeat world. The dialogue in particular (voiced) is great. There are obvious references to past games in the series within it, as well as neat culture references, jokes, and the unusual buffoonery.

End of the day: I’ve always felt like Narwhal was a great start to a new MI series and it still is on iOS platforms. Ticky-tacky problems aside, I can’t recommend this game enough to adventure game fans or logic puzzle lovers. This game is good and deep. Also, the ghosts of the series’ past are alive in this recreation, making it an easy pick-up for anyone who grew up with MI (or, strangely, are just now getting their start via rereleases). Check it out.