Back in early December, Gameloft revealed the latest entry in their series of highly inspired takes on established franchises called Starfront: Collision, a real-time strategy game that takes more than a few cues from Blizzard’s insanely popular Starcraft series. After hitting a slight delay from its intended release date last week, Starfront: Collision [Free] is now live in the App Store. Like Gameloft’s previous release Sacred Odyssey [Free/HD], Starfront can initially be downloaded for free and provides a short taste of the game, with a $6.99 IAP to unlock the full version.

Typical of many RTS games, Starfront features 3 playable races who are all in a battle over the rare resource Xenodium that is found on the planet of Sinistral. There is the human race known as the Consortium, a hostile alien race called Myriad, and a sentient robot race called the Wardens. The full version of Starfront features a 20 level campaign that is split into 3 sections which has you playing as a different race during each one. 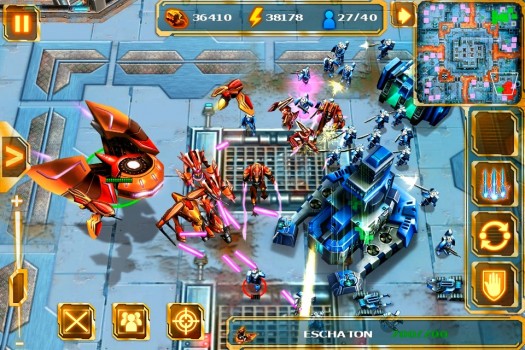 Additionally there is a skirmish mode with 7 maps to play on and a multiplayer mode that features both local and online play for up to 4 people. Unfortunately, since the game has only been out for a few hours I haven’t been able to find an online match to test it out. Hopefully in the coming days the servers will fill up as more people buy the game. While a decent sized campaign and a skirmish mode are nice features on the single player front, strong multiplayer is what will really give Starfront longevity.

One of the biggest issues with RTS games on the iPhone is being able to have controls and UI that work on such a small screen. I’ve only spent limited time with Starfront, but it seems that they’ve nailed it pretty well on this front. Navigating the terrain and setting up any of the 8 different structures is a snap. There are 10 different unit types for each race, and for the most part they are easy to control. It can be a bit difficult to select certain units because they appear so tiny on the screen, but there are some nice advanced features like assigning units to groups for quick selection or creating a selection box by pinching the screen with two fingers. With a bit of practice and some forethought, navigating and commanding your army isn’t a problem.

A game like Starfront is really hard to judge off of brief impressions, since it will take many hours of play to determine how balanced each race is and stress test the online multiplayer servers. That said, my first impressions of Starfront are really good. We’ll definitely put the game through its paces in the coming days, but seeing as it’s free to download initially I can definitely recommend checking it out. Just be aware that it’s a 680mb download and requires a 3rd generation device or above.

The free version of Starfront gives you access to 4 tutorial levels that do a wonderful job at explaining how to play, and the first mission of the campaign. A $6.99 in-app purchase will then unlock the remaining 19 campaign levels, skirmish mode, and multiplayer. There are a ton more impressions rolling into our forums which have been largely positive, and there is a dedicated thread to finding online opponents and discussing strategies. I like what I’ve seen of Starfront so far, and it’s worth trying out the free version if you’re a fan of real-time strategy games.