Last month at Macworld 2011 I spent some time playing with XMG Studio’s latest game Cows vs Aliens [99¢], and yesterday it became available for download in the App Store. Cows vs Aliens is a super casual high scoring game that uses a gameplay mechanic that struck me as especially unique. I enjoyed my ten minutes or so of playing Cows vs Aliens at Macworld, but now that I have the full game in my hands I’m liking it even more and finding it especially hard to put down. 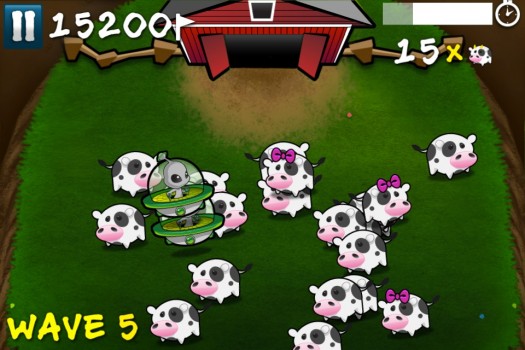 Those are the basics, but there are additional aspects in Cows vs Aliens that add depth and strategy to the gameplay. Each wave requires you to herd a certain amount of cows into the barn all whilst a clock is ticking away. The clock resets each time you complete a wave, but the number of cows required increases with each wave and the timer can easily tick away if you’re not paying attention. There are also harder types of aliens that will begin to appear as you progress. The initial aliens are pretty slow and easy to shove off the side, but later aliens are quicker and more aggressive, and aren’t so willing to be pushed around. 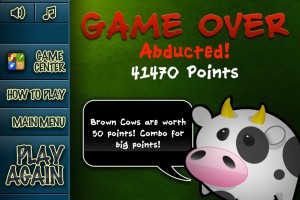 The real hook in Cows vs Aliens is the scoring system. Cows come in several varieties, and are worth between 10 and 50 points each when wrangled into the barn. Herding a group of cows into the barn at the same time adds a multiplier to the scoring that increases with each successive cow captured. Being patient and letting a huge group of cows amass before herding them inside can earn you some insane scores, but it also gets decidedly more difficult to weed out the aliens when they’re in the middle of a big bunch of cows. Pushing cows off the sides while trying to dispatch aliens won’t count against you, but it does deplete the amount of cows you can use to score with.

The controls in the game just feel good, and there’s something very fun about pushing around a herd of cows. The natural inclination is to use two thumbs to push cows from the outer edges towards the middle of the screen, but Cows vs Aliens utilizes multitouch which can prove very beneficial if used wisely. You can create up to 5 points of contact on the iPhone, and up to 11 on the iPad. While I generally stick to the two thumbs approach it can be really helpful to stick an extra finger or two onto the screen when a pesky alien is trying to sneak into my barn. This can result in what resembles a game of finger Twister as things get increasingly more hectic. It’s definitely a lot of fun.

If I had to come up with one negative about Cows vs Aliens, it would be that it’s really just a one-trick pony. There’s only the one mode with wave after wave of cows where the goal is to get a high score. Still, it doesn’t make it any less fun and I’ve been hooked on trying to rise up the ranks on the Game Center leaderboards. Some of the best high scoring games around, like Doodle Jump [99¢] or Canabalt [$2.99], rely on a single type of gameplay and I think that Cows vs Aliens has found a similar winning formula. The game is also really cute, with colorful Retina Display graphics and a catchy tune. Coupled with the interesting control mechanic and compelling scoring system, Cows vs Aliens has totally reeled me in.

You can head over to our forums for a discussion about the game and further impressions, and if you’ve got an extra dollar floating around and enjoy high score-based survival games then I’d suggest hoofing it on over to the App Store and checking out Cows vs Aliens.