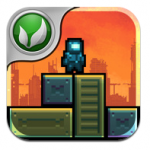 The Blocks Cometh makes me want to toss my iPod into a toilet. I envision this happening in slow motion. The iPod tumbles end over end towards the porcelain rim and then a triumphant splash of thick, watery droplets crown the device as it makes contact with the water. Maybe there’ll be a sizzle or two as the electronics thrash before drowning. That’d be hip.

I can’t help but to compare The Blocks Cometh to Super Meat Boy because of the love and hate relationship I’ve developed with it. Like with Team Meat’s game, The Blocks Cometh has style to spare, a superb tone, and a lot to share, but it’s so demanding AND I suck so bad at it, that it makes me want to snuff my iPod and listen to it fizzle. 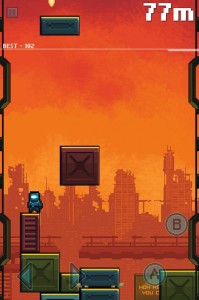 You get the idea. But there’s an important distinction between these two games: The Blocks Cometh isn’t about trial-and-error, and is it as insane-hard as SMB. It’s a manageable game — that I still somehow manage to suck at — and a different kind of game to boot.

At its core, The Blocks Cometh is like a crazy game of Tetris that has you, as an avatar, climbing up stacks of blocks that fall from the sky. You can double jump, slide, and even shoot block as they tumble, which is harder than it sounds. I suck because I get can’t click with the game’s pace and the precision; the speed of the falling blocks ramps up quickly, and you need to be pretty nimble in order to navigate the environment as it changes. I’m just not fast enough. 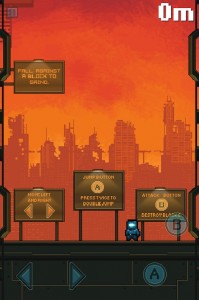 To give you a sense of what I’m talking about: a common scenario involves interaction with three blocks and the use of at least two action moves in order to reach the highest point. Sometimes you’ll need to slide on a falling block, jump onto a stagnate one, and then double jump to the other side of the level in the span of a second or so.

When you manage to do this you feel like some sort of super ninja — the master of all things jump, slide, and shoot. It’s great… until you get clobbered because your timing was a nano-second off, which mine usually is.

Like SMB, The Blocks Cometh rocks an excellent tone and a visual flair reminiscent of an 8-bit game. It’s highly stylized and fitting, especially when you factor in the retro-infused music that plays over the action. It’s good.

So, a fair word of warning to those of you who don’t want to get bludgeoned by a game on a device that can make phone calls: The Blocks Cometh is tough and requires a level of precision that I can only barely muster (not that I’m a super ninja or anything.) But if you don’t mind a little pain with your video games, then this is definitely worth some space on your device.