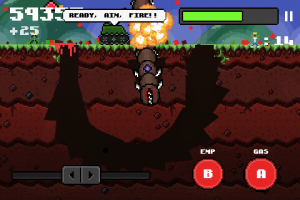 DeceasedPixel has just dropped the price of their universal iOS game (for iPhone, iPad) Super Mega Worm [App Store], a pixellated take on JTR’s Death Worm, to zero for a limited time in celebration of the release of the game in the Mac App Store [link] and the launch of the Verizon iPhone.

Super Mega Worm opens with an 8-bit retro cutscene explaining how humans have consumed the earth, and how mother nature now has a bone to pick with us. She tasks her favorite pest exterminator, Wojira the Death Worm, with wiping humans from the earth and restoring balance to the force…you get the idea. It’s a nice little setup for the mayhem that is the hallmark of the giant worm game, and an introduction to the glorious mario-like pixel art.

We enjoyed the game in our review back in August and are happy to report that most of the issues we encountered way back when have been addressed in updates from the developer.