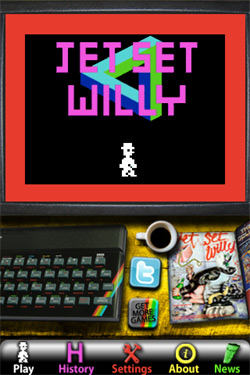 Originally released for the Sinclair ZX Spectrum in 1984, Jet Set Willy is a sequel to the similarly popular UK classic Manic Miner and involves guiding Miner Willy around his massive mansion (60 screens in all) in an effort to clean up the place, collecting various items strewn about it during a party the previous night so that his housekeeper will let him into his bedroom to get some much needed sleep.

The game was typically played via keyboard directional controls way back when, and on iOS devices is controlled via tap (below the action in portrait, overlaid in landscape), but with a bit more flexibility than the typical iOS D-pad touch game, thanks to Elite’s customizable “iDaptive" control system. Both iOS versions of the game offer the standard play mode as well as an infinite lives mode for the weak. 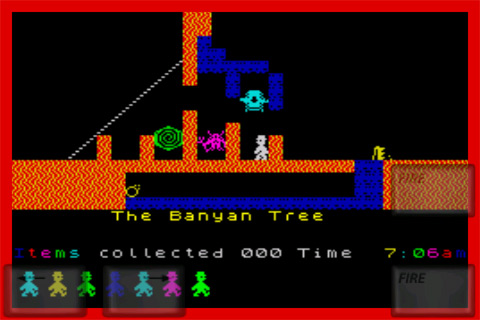 In addition to these standalone versions of the game, Jet Set Willy will soon be arriving as part of a downloadable content pack for Elite’s ZX Spectrum: Elite Collection [iPhone, iPad], as did Manic Miner [iPhone, iPad] following its standalone iOS release. TV-out is expected for all of the mentioned Elite titles in a future update.

Jet Set Willy, in all of its color clashing goodness, is certainly not much to look at today, but rendered out in those 15-colors are some insanely difficult platformer challenges. And, after the first few minutes, your eyes will stop bleeding, I promise.