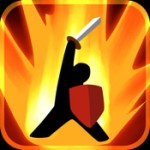 In my time with TouchArcade, I’ve played a lot of games. Heck, a good chunk of my day is devoted to picking up where I left off the previous day on the AppShopper new games listing, and looking through every single game that appears on the App Store. Anything that even looks vaguely interesting I’ll download and spend a fair amount of time with. Why is this at all relevant? Well, since I’m up to my ears in iPhone gaming the whole week, I try to unplug as much as possible during the weekend, unwinding away from the world of iOS. 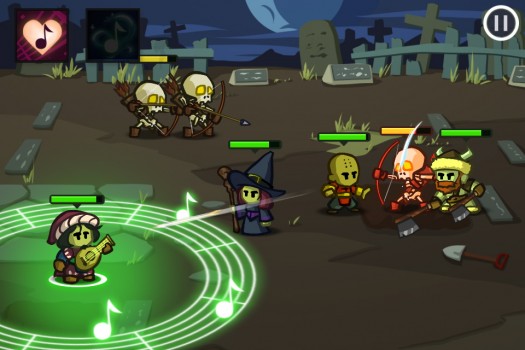 Many developers have tried their hands at making iOS RPG style games, Aralon: Sword and Shadow being the latest and greatest example of a traditional RPG arriving on the App Store. But where Aralon and so many other games fail is that they’re great games that just so happen to run on the iOS platform, rather than being a great iOS game. It’s a distinction that becomes clearer and clearer as time goes on, as developers split between sticking with largely conventional controls adapted to the touchscreen in the form of virtual controls and developers who create games like Battleheart that could only exist utilizing the multitouch interface of iOS devices.

Battleheart takes traditional RPG elements found in party-based RPGs and even to some extent MMORPGs and boils them down to their essence. At its core, gameplay consists of managing a four member party through various battles. There isn’t really any story to speak of aside from random flavor text describing characters and levels, characters only have four equipment slots, and there’s only two statistics for each class to even worry about. In my early time with the game the latent RPG power gamer inside of me initially thought that how simple everything initially seems to be was a significant drawback, but oh, how wrong I was. 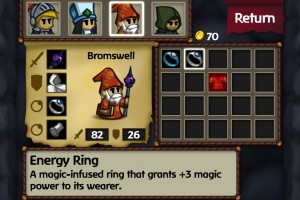 Instead of endlessly delving through menus, min-maxing, and everything else, the entire focus of Battleheart is fantastic party synergy and touch-based battle management. Playing through the game slowly unlocks additional classes available via an in-game tavern where they can be hired. A wide variety of classes are included, but they all fall under the three standard class roles: Damage dealers, meat shields, and support classes. As you progress in the game, intense micromanagement is required of each of these types of classes, and it’s incredibly cool how it all goes together.

For instance, the party that I’ve found myself preferring consists of a monk, a witch, a cleric, and a bard. At the start of the battle I’ll get my bard to start playing his song targeting the monk, get the cleric healing the monk, then position them towards the back of the battlefield spaced apart a little bit. I’ll position my witch in the center, then put the monk on patrol picking up monsters as they appear on screen. The monk then holds their attention (or tanks them, if you’re down with the lingo) while I focus the attacks of both the monk and the witch on individual enemies until everything is dead. Rinse and repeat with each wave of bad guys, paying special attention to prioritizing keeping monsters off both the bard and cleric.

How you do all this really is the clever part of Battleheart. It’s entirely touch driven, so having the cleric heal my monk is as simple as drawing a line originating from the cleric and ending at the monk. Similarly, having the monk run after an enemy and attack it is as easy as drawing a link from the monk to the baddie. It’s even multitouch friendly, so commanding both my monk and witch to attack a single target just amounts to using two fingers to draw lines from both of them converging on a single enemy. To move your party members around, you draw lines the same way, only ending the line at wherever you want to move them to. 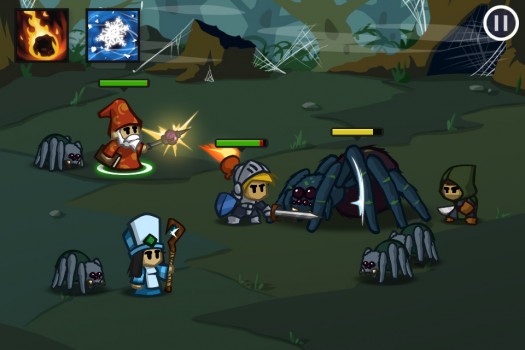 Using this incredibly simple interface method, you’re able to run what essentially amounts to a four player MMORPG party all by yourself. It all goes together very well, and really feels like a similar experience as you’re rushing to pull monsters off your healer while rotating healing around, focus firing enemies down, and using various forms of crowd control. Enemies aren’t completely mindless either, with some that won’t just contently beat on your tank, and instead will go directly after your healer. Some enemies are healers as well, and you’ll need to drop everything and slay them as soon as possible. The list goes on and on.

Tapping a particular unit during a battle selects it, at which point you’re able to use various active abilities by tapping their icons on the top of the menu. These abilities vary wildly, and really encourage you to try mixing and matching different party members to see which ones you like. The whole reason I’ve found myself preferring the monk, for example, is his starter ability attacks everything on screen which is incredibly useful when a huge wave of monsters appears and they’re running everywhere attacking random party members. Similarly, the witch gains an area effect damage over time spell, which works great once I get all the monsters stacked up and attacking my monk. The cleric has an ability that shields its target for a brief period of time, which allows my monk to easily take the damage of everything beating on it. 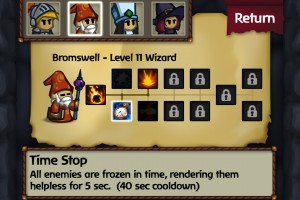 It’s crazy how it seems no matter which classes you mix and match, you always seem to have abilities that compliment each other. Also, as your characters level up, every five levels they unlock an additional pair of abilities that you must choose from. These can be switched at any time in between battles, allowing even more customization and party synergy. Sometimes these choices will be two entirely different active abilities, or sometimes they’ll be two similar passive abilities with different effects. In the case of the bard, you’re given the option to have his song either give an additional 50% damage bonus, or an additional 50% armor bonus.

As you begin to master micromanaging your party, the game throws curveballs at you in the way of challenging boss battles. My favorite is a slime boss, with gimmicks that will be familiar to anyone who has been through Naxxramas in World of Warcraft. In the first phase, it’s a big fat slime that spews pools of acid at your party members. These pools cause damage, causing you to keep your entire party moving to avoid them. Just when you think it’s about to die, it splits in explodes in to tons of tiny slimes that get blown to the edges of the screen. They all slowly creep together, and combine back in to the main slime. The fight goes like this until you’re successfully able to kill all the little slimes before they reform. It’s a ton of fun.

The only real drawback of the game, if you’d even call it that, is the lack of any kind of in-game documentation. I actually found myself enjoying the fact that the game doesn’t hold your hand through everything, as it gives it almost a retro air of discovery about it when you figure out what purpose a particular class serves. If this isn’t your cup of tea, the thread in our forums offers an exhaustive amount of information about basically every class, ability, and equipment upgrade you’ll come across on your quest.

If you can’t tell by now, I really have nothing but good things to say about Battleheart. It successfully scratches the MMORPG itch of party-based combat while being a completely pick up and play game single player game. To sweeten the deal, it’s even universal, with graphics optimized for the Retina Display if you’re playing on a newer device. I’ve found myself preferring playing on the iPad, but the game is just as good on the iPhone. Another great thing that’s been pointed out by our community is that Battleheart works great as a two player game, with each person responsible for half the party thanks to the multitouch input. The fantastic graphics are also cartoony enough and gore-free that you can even share the experience with kids without issue.

Battleheart is an absolutely effortless recommendation.