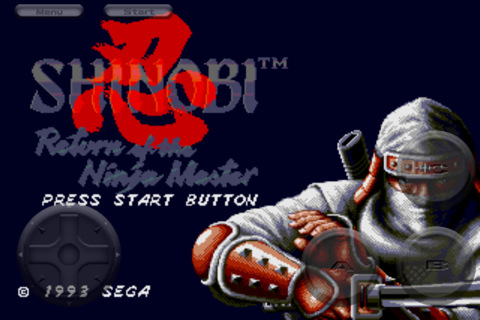 One of the best run-and-jump fighters I’ve ever played is Sega’s 1987 coin-op release, Shinobi. Several of us here at Touch Arcade spent hours in the local arcade together way back when, shoveling quarter after quarter into that Shinobi cabinet. We grabbed various home versions of the game, but none lived up to the excellent arcade experience. Happily, a number of sequels followed that targeted consoles specifically, and they provided some great ninja slashing action. The best of the lot in the eyes of many, myself included, is Shinobi III: Return of the Ninja Master. It was originally released for the Genesis / Mega Drive back in 1993, and tonight Sega has released the game, wrapped in their iOS Genesis emulator we’ve seen before, through the App Store [link]. 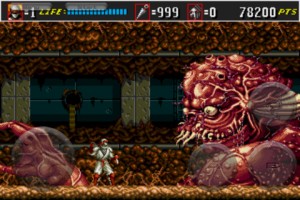 In Shinobi III, you’re back in the role of ninja warrior Joe Musashi as he fights to defeat the evil organization Neo Zeed, which is bent on world domination. You move through seven rounds of carnage, laying waste to scads of other ninjas with your shinobigatana, shurikens, and four magical ninjutsu techniques. You must brave a variety of hostile environments, including forests, caves, cities, laboratories, and factories. You even ride a horse. And surf! It’s a harrowing affair, but the game is actually a bit more forgiving than the first in the series, employing a life meter that allows for accumulated damage as opposed to one hit kills, as did Revenge of Shinobi which preceded it. It’s a great game — a bit short on play time, but full of action.

…on the Genesis (and Wii Virtual Console), that is. Sadly, as has been the case with numerous straight arcade / console conversion from Sega and others in the past, much of the great experience of the original has been lost in translation to the iPhone. There is nothing to complain about as far as performance from the emulator — it seems Sega has been steadily improving it, and things run smoothly and at full speed for all intents and purposes on an iPhone 4 test device. The issue is with the controls, their arrangement and inflexibility. 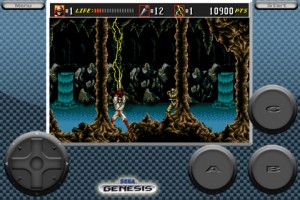 Like other Sega iOS releases running in their emulator, there is both a full screen and a windowed view. The fullscreen mode, with its larger image, is the most desirable play mode, I would say, but it suffers from the fixed arrangement of the onscreen D-pad and three action buttons; very often a thumb on either completely obscures your character, making gameplay highly awkward. This can be avoided by using the windowed view which renders the game at it’s native resolution (fullscreen is a scale-up, not the other way around) with D-pad and buttons below, but on a screen with a pixel density as high as any iPhone or iPod touch device, it’s a strain to behold. It’s possible that an option to reposition the touch points would help matters but, frankly, I can’t imagine an arrangement that would be truly acceptable. As is, the gameplay will leave you longing for your old Genesis.

See a gameplay video of the original console version.

And so, again we have a truly excellent console title that falls sadly short of the mark in making its way to the iPhone. Shinobi III: Return of the Ninja Master is likely an App Store purchase that only the true Shinobi devotee could make with satisfaction.