These castle versus castle games are all over the App Store. Some are fantasy based, a whole heck of a lot of them use stick figures, and one even uses puppets. The gameplay of these games are all strikingly similar: You have a set of units which cost a particular amount of whatever resource it is that the game uses. Once you stockpile enough of that resource to produce a unit, you tap the button, and said unit comes rushing out of your castle to battle to the death. (Or, if things are going your way, make it all the way to the other castle and destroy it.)

This also aptly describes the core gameplay found in Liv Games’ Legendary Wars [$2.99], but there’s so much variety and so many things to work towards that I’ve been having an absolutely fantastic time playing through it. The game begins with an entirely cliche fantasy setting of a kingdom in chaos, and you’re in charge of collecting Sunstone fragments in attempt to rid the world of evil. The path the story takes you through involves fighting all sorts of different enemies on levels with varied objectives. 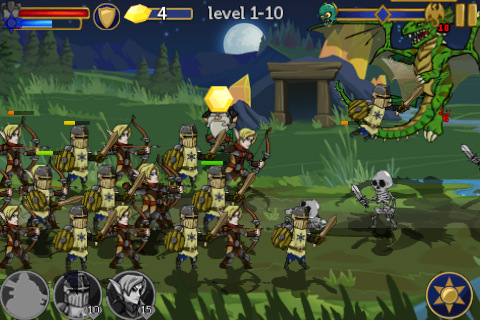 While many levels consist of the standard castle vs castle battle, Legendary Wars breaks up the monotony with levels where you’ll control a single unit that play like a sidescroller, or battles where you’re given an extremely powerful hero unit which must survive, and more. The actual castle vs castle fights are great too, as instead of simply sending an array of units to their doom, successfully surviving a battle requires a bit of strategy.

Battles begin with you dispatching a miner (aptly named “Miney") to your mine in the background to collect crystals. He saunters off to the mine, appears a few seconds later with a massive chunk of crystal in his hands, and you’ve got to tap it to collect it. Once you’ve got enough crystals to train additional units, much like other castle vs castle games, you tap the icon for said unit and it comes barging out of your castle. The main difference here is that there are three distinct lanes in the game world that you can spawn your dudes in and that enemies can come running down. 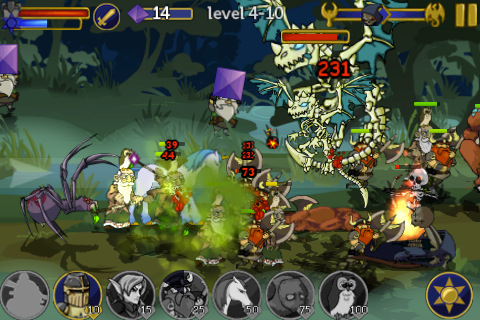 Units can be tapped and directly controlled, allowing you to make them change lanes, engage an enemy, or retreat back to your castle. This basic level of control actually gives you the power to do a surprising amount of micromanagement in your battles. For instance, if you’ve got a set of enemy archers incoming, moving your units to different lanes will avoid their attacks until they get within melee distance to start fighting. Enemies will change lanes too, so you’ve got to do some quick finger work to keep your army from getting pelted with arrows.

Similarly, the different units of your army compliment each other and must be used intelligently to win. Knights who do little damage but can take a beating need to be deployed in front of archers, who can bring the pain but quickly die if any pain is brought upon them. Killing enemies fills up a mana bar of sorts, and you’re able to do a special attack for bonus damage by selecting a unit and tapping the button in the bottom corner of your screen. Oh, and while you’re doing all this, you need to be constantly collecting resources from your miner(s).

Following a successful battle, you’ll be able to return to your armory where you can upgrade various statistics for each of your units, as well as your castle itself. The rate at which these upgrades are unlocked seems to be perfectly tuned, as each battle affords you a small set of upgrades, while dangling that dreaded virtual carrot in front of your face to play just one more battle to soup your forces up even more.

There are endless defense, side scrolling, and survival game modes which can be unlocked which add replay value to the game, and the campaign mode itself is pretty massive. If you have it in your heart to play yet another castle vs castle game, Legendary Wars is an easy pick. Even if you’ve grown tired of these types of games, it does enough differently that it feels remarkably fresh, which is a real accomplishment in any over-saturated genre on the App Store. The only real down side this game has it that it doesn’t come with Retina Display-friendly graphics. If you’re playing on a newer device, the game (like most non-retina games) looks fairly blurry, but this didn’t stop me from enjoying it.