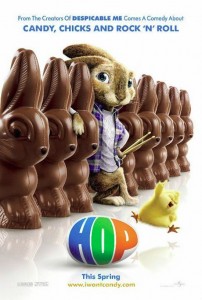 Lima Sky’s Doodle Jump [99¢] is no stranger to crossovers. In fact, there was a time where the current trend of the App Store was either including Doodle Jump in some way, or getting Doodle Jump to include an element of your game. Pocket God [99¢], for instance, featured a mini-game similar to Doodle Jump while Doodle Jump included the pygmies as a secret playable character.

According to our bros over at Pocket Gamer, Lima Sky has just inked a deal with Universal Pictures to include the main character of the upcoming movie “Hop“, likely as part of their somewhat inevitable Easter-themed update. Doodle Jump has become surprisingly mainstream over the years, and it has been featured in a number of places including Lady Gaga concerts, The Jimmy Fallon show, and even on the sitcom The Big Bang Theory. Or, as Lima Sky front man Igor Pusenjak says, “To have Doodle Jump involved with the launch of a major motion picture demonstrates how influential apps have become in just a few short years.”

Sure, this isn’t the most remarkable iOS news to hit the scene lately, but it’s still really cool to see major movie studios like Universal Pictures taking an interest in iPhone apps. Also, sponsored content like this only leads to more free updates for players. The only question that really remains is which game will fall under the crosshairs of the next big-budget marketing push? An Angry Birds [99¢] tie in with the upcoming drama “The Eagle“? (I hope so, that would be awesome.)