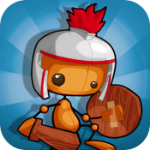 On the eve of what could be the biggest Apple announcement since the iPhone, Battle of Puppets [App Store] somehow is successfully holding my attention over obsessively refreshing every tech blog on the planet looking for more tablet tidbits. (A lofty accomplishment, to say the least.) While at the heart of the game it’s little more than a castle vs castle battle, Battle of Puppets is absolutely oozing character and charm through its amazing art style and other really clever features.

If you’ve played one castle vs castle game, the gameplay mechanics will be instantly familiar to you. If not, here’s the genre in a nutshell: Two castles are on opposing side of a battlefield, you need to manage various resources to produce units, often limited by a unit cap that may change on each level. You must formulate a strategy based on the different strengths of your units playing off the weaknesses of your opponents units to fight your way to their castle and eventually destroy it. 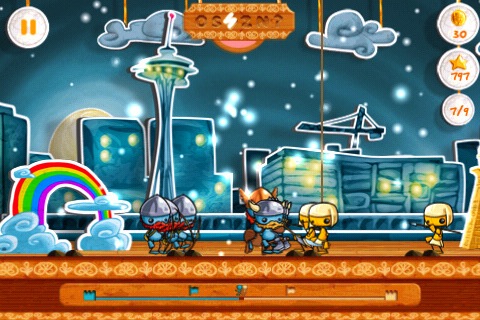 The battlefields in Battle of Puppets are amazingly cute stages with scenery that moves around depending on the time of day, and when a unit dies it’s yanked off stage. Continuing with this theme, each of the armies in game are themed after a different classical opera, with everything from spanish forces themed after Carmen and to asian themed armies inspired by Madame Butterfly.

Compared to other castle vs castle games, the amount of thought and small touches developers Small Wonders put in to the game is awesome. The animations are great, each army feels a little different, and there’s even three save slots so multiple people can be playing the game on a single device. The following gameplay trailer should give you an idea of the atmosphere of the game:

There are a bunch of castle vs castle strategy games on the App Store, but few can come close to rivaling the look and feel of Battle of Puppets. Playing as each of the different opera forces should provide a decent amount of replay value for people who become engrossed in the game, but under the hood it’s still a castle battle game. If you haven’t been interested in them in the past, the eye candy in Battle of Puppets likely won’t be enough to sway you over.