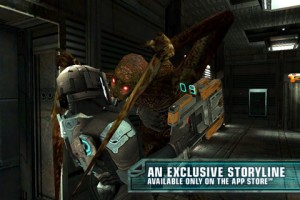 So, by now you’ve read the reviews for Dead Space [$6.99 / HD]. The game is good. Real good. But on top of sharing my thoughts about it, I wanted to get some inside perspective on the three pillars of the game: its world, its scares, and its action. For that, I went straight to the source, which happened to be lead designer Jarrad Trudgen.

Let’s start with the scares. Dead Space is unusual in that it’s able to make the predictable or obvious scare as impactful as the sudden kind. It’s all in the tension, the build-ups to the event. Scripting and the placement of precursors and mood setters are a big part of how the team succeeds in this regard. The other part is leverage. This game is able to use any mechanic, any trope no matter how insignificant, to scare you.

Of course, touch screen and the power of the iPad and iPhone can be barriers. So, I asked how the limitations informed the design of the horror elements, in addition to asking for comment about how some of the more clever stuff was developed.

“Scares are a big part of survival horror games and Dead Space is no exception. I still fondly remember jumping out of my skin when those zombie dogs jumped through the window in Resident Evil on console,” Trudgen said. “So, including some similar moments was a high priority for me personally.

“For the first time in our studio’s history we developed a scripting system that allowed designers to set up scripted events using triggers, sound cues, animations, enemy spawn controls etc. — basically all the tools a designer would use on a console title.”

“This allowed us to have a good variety of scripted scares and atmospheric scenarios play out over the course of the game. We also employed teleport and asset switching scripts that allowed us to produce some truly startling and disorientating hallucination sequences that I can’t wait for players to experience.”

Dead Space has a lot of scares. The general knock on them is that they’re too predictable. I don’t necessarily “get” this criticism because I feel like Dead Space always does a fantastic job at keeping you at a level of alertness that makes you jump at whatever goes bump or thump in the game. I especially dig how these scares are worked into basic tropes, like the Necromorph room I spoke about in the review.

“As far as leveraging game tropes against the player you are absolutely right. In order to keep things fresh we play with misdirection a lot. You set up an expectation for the player like, ‘Dead Slashers always pounce on me,’ or, ‘I’m safe in this type of room.’ Then you let that expectation set in and finally, once you’ve got some mileage out of it but before it gets stale, you violate that expectation… or don’t.”

And the technical challenges?

“In terms of delivering horror, the limitations we encountered on the mobile device were pretty much confined to issues of fidelity. Horror relies a lot on atmosphere and, to a degree, the more realistic you can make a game look the more convincing the atmosphere. “

“So, a big challenge for our artists and programmers was to squeeze every last drop of performance out of the devices to make the best possible looking game we could. We have a lot of staff with console experience and this knowledge is applied to developing our products."

“For example, our art pipeline is fundamentally the same as console production. Nothing is ported, everything is created from scratch using concept art and existing assets as reference, where applicable. We then bake down these high-resolution assets to produce convincing lighting on our character models, environment pieces and props.”

“Design works closely with Art when building out the levels to ensure that environments and props are laid out harmoniously with respect to the baked lighting. Through this process we make sure we nail the look and feel of the Dead Space universe with a minimal hit on performance,” he said.

Let’s talk about combat now. In the review, I pan it. The lead character, Vandal, doesn’t have the mobility I think is really required to deal with what’s coming at it. Early in the game, though, there’s a really good balance of combat versus exploration, as well as very careful, measured waves of enemies that keeps frustration down to a minimum.

I would have rather had more puzzles and more imaginative segments in Dead Space, but action was a crucial pillar of the game’s design alongside horror. Also, the team wanted to keep the game accessible with the touch interface.

“Early in pre-production we made the decision to focus on the horror and combat aspects of Dead Space and less on the navigation and puzzle solving elements,” Trudgen said. “With any development schedule, priorities need to be set and by making this decision early on we maximized the resources poured into these more accessible and engaging features to make sure they were robust.

“The primary goal behind this decision was ensuring that strategic dismemberment remain the core combat mechanic of Dead Space – a challenging feat requiring physics support to send lopped limbs flying and colliding with surfaces realistically. Although we do have a few puzzles in the game and the occasional more labyrinthine environments we felt that combat was a better focus for a platform that is often played in short bursts.”

Accessibility means more than just workable controls — as you’ll notice in Dead Space, the team cuts content that appears in other Dead Space titles in order to ease some of the burden that touch screen players experience with full-featured TPS titles.

“Accessibility is key on iOS devices and as combat is the core mechanic of Dead Space it needed to be very accessible. We knew that the Dead Space 2 team was considering making stasis a regenerating resource in their title. We decided to go one step further and make health regenerate, too.

“This meant one less thing for the player to fiddle about with during combat, allowing the tension to come from intense sustained battles rather than a lack of resources. Combined with our streamlined inventory and contextual melee events the combat is kept exciting and tense but not frustrating. In terms of balancing the combat we added difficulty support to cater for the diverse range of iOS players.

“Easy is suitable for anyone new to 3rd person action/horror games while Hard, which is unlocked along with a New Game+ mode after completing Easy or Normal, is very challenging.”

And of course, there’s the HUD. It’s brutally clean, leaving a lot of the screen open to play with.

“Our decision to maintain the minimal HUD aesthetic of Dead Space on console was primarily to increase immersion in the game world and allow an unfettered view of the strong art content.

“However, it was also a necessity in terms of our control scheme to provide the best possible player interaction. Other 3rd person shooters typically restrict input to a small arbitrary region of the screen, slap a ‘button’ on it and call it a day.”

“The result for the player is an often frustrating experience, where by the time they line up a shot, find the ‘fire button’ and tap it, then the enemy has moved on and they must repeat the process. Instead, we have developed a ‘tap anywhere’ style control scheme that gives the player greater freedom in where they place their thumbs/fingers and a better overall control experience. “

As for the world, well, you know most of the story from pre-release coverage. Dead Space takes place after the first Dead Space and leads directly into the events of Dead Space 2, which just released this morning in the US.

Like I said in the review, I would love to see more “new” in Dead Space, but there’s a lot in the game that makes it feel like the original title. This is something the team wanted.

“In terms of keeping that feel of the original Dead Space we decided to build some of the iconic areas of the original to make players familiar with that game feel right at home – the tram station for example is unmistakable and immediately conjures up feelings of nostalgia and, hopefully, that old familiar dread.”

“We also built some completely new areas of the Sprawl, the space station where Dead Space iOS and Dead Space 2 are located and these include a flesh processing plant, a water treatment facility, one of the crossover tubes connecting the Sprawl to the Titan Shard and, finally, the Titan Reactor.”

“Concept art and other reference material was used to make sure that these new environments, the 2 new weapons (the Plasma Saw and the Core Extractor) and the Boss designs were consistent with the iconic Dead Space style – that gritty, lived-in feel and engineering aesthetic to the weapons. As a bonus you can see the evolution of some of these designs through exclusive concept art wallpapers for your device that are unlocked by earning achievements,” he said.

We couldn’t talk about the future of the game world and Dead Space iOS, unfortunately, as the Trudgeon is unable to comment on DLC or his desire to make another game. But we did talk about a really big spoiler, so I’ll share that conversation with you next week when you’re finished with the game.

Dead Space is available on iOS now. Check it!