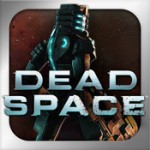 Dead Space is like a wicked seesaw that keeps you teetering between states of panic and outright nervousness no matter how predictable the outcome of a scenario is. This is its real voodoo, the magic of the title, which is informed by a sharp, terror-drenched atmosphere influenced by various sci-fi horror works such as “Event Horizon” and “Alien.”

Its setting, plot, and combat feed into this rich atmosphere, making the title feel as if it were a cohesive whole. However, the game’s weakness, the combat, should give you a bit of pause. It’s not hard to recommend Dead Space, especially if you plan to play with the blinds pulled down, but it’s not a good shooter, which carries some weight. 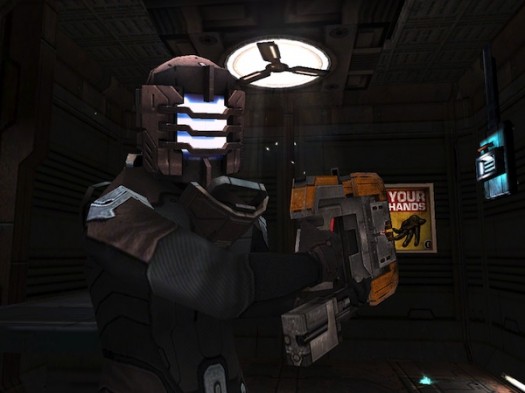 Dead Space is a sequel to the original Dead Space, a console and PC joint created by the folks at EA Visceral. It’s a confusing name at first glance, until you peel the experience back a bit and learn that Dead Space iOS really doesn’t do anything to separate itself from its forerunner. It feels like a one-off experience just so happens to take place before the events of Dead Space 2 on the mining colony “Sprawl.”

You spend all your time on this colony drifting amongst a cluster of stars, completely detached from the rest of civilization. Gorgeous panels and LCD displays sprinkle and contrast the cold, hard steel of the floors and walls of the Sprawl, while the remnants of civilization inform a grim tone and atmosphere. 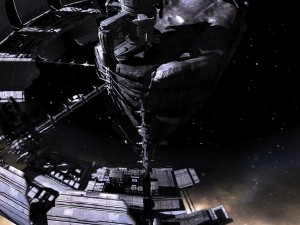 Things, of course, have gone bad on the colony. Sickly, disjointed aliens are now taking over, slaughtering all in their path. For you, this means you get to see the aftermath — all those pools of crimson, those piles corpses with the missing flesh, and the wrecked lockers, broken glass, and general disarray.

I think what’s most remarkable about the setting is that it’s crafted in a way that all the future stuff feel familiar, yet obviously above and beyond what our civilization can accomplish and build. You can connect with the setting, but you recognize it as alien.

And it’s in solitude that you dwell. Dead Space is really good at making feel both helpless and alone in the face of something much, much larger than yourself. In this specific one, your avatar, code-named “Vandal,” isn’t the chatty type. Your guide — who also doubles as the games’ narrator to some degree — isn’t all that talkative either. Also, your adventure, as a result of an incident, isn’t filled with many people with jawbones intact. Essentially, you live and breath in a world without any living and breathing.

So, you’re alone — alone against hordes of aliens, I should add. Unfortunately, combat isn’t good enough. Vandal is essentially a slow meat turret with basic strafing abilities, which makes it hard to be either aggressive or even defensive. Granted, the weaponry in the game is plenty violent; the Plasma Cutter and the god-like drill weapon can put serious hurt on your foes, but you’ll constantly be re-negotiating your position in battle and never quite comfortable with what you’ve chosen. 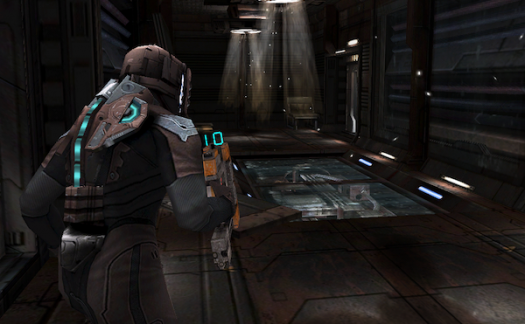 Combat isn’t this grand ballet where you can skillfully move about enemies, juking and jiving and delivering punishment with the grace and ease of a Kratos. It’s more like a square dance for people with insanely large feet. This wouldn’t be so much of a problem if you could aim and fire with accuracy and quickness, but you can’t do that. The touch implementation of both these mechanics — bringing up the gun and choosing your target — are clunky, leading to a lot of missed shots, missed opportunities and a needless death here and there.

And you’d figure the combat would be grand: the game features a dismemberment mechanic for god sakes that rewards you for shooting off the limbs of aliens. But the accuracy just isn’t there, so the pay-offs aren’t either. (You also can’t aim with tilt or gyrometer, for that matter. There’s also no way to invert the Y axis, or any way to customize the controls.)

The kicker for me is that I think the weakness of the combat actually enriches the experience to some degree. It heightens the scares and does the most work in informing the nervousness you’ll feel. I say this because you’re not a Terminator; you can’t just obliterate anything in your path, making you actually fear the next confrontation. 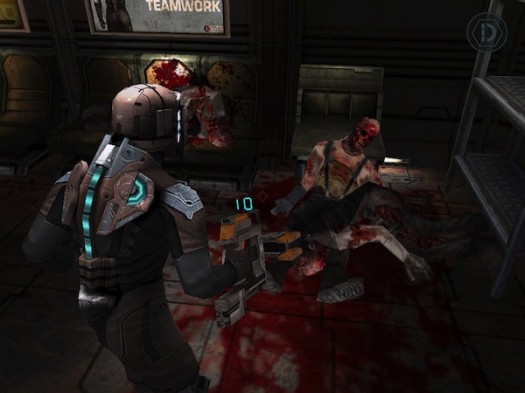 There’s a level of immersion in this game as well, due in large part to the game’s super limited HUD. Health and bullets, for example, are displayed visually on the character and its respective guns, which makes for a super clean presentation — one in which you control Vandal with invisible dual-analog sticks, which are serviceable, but still not ideal for some of the things the game throws at you in the action department.

Bullets are limited, which is an interesting touch. The lack of ammunition will force you to rethink battle strategies, readjust and lean on the game’s generous upgrade system. With collected nodes and cash, you can refill your guns and make them stronger and faster via Benches and an in-game Store.

To dive into a little bit more of the brick-and-mortar, this is a rigidly linear, scripted game that goes a little something like this: you are to go [there], and the only way you can get to [there] is to find a way to unlock a door, the key in which you’ll need just so happens to be tied to a scare or a fight with monsters. And… that’s about it. 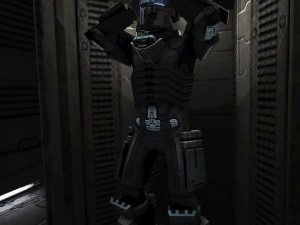 Of course, straying from the set path by a few feet will net you goodies, but for the most part, the game doesn’t offer anything outside of its invisible racing line (which, hilariously, you can pull up visibly at any point in case you lose your way).

And while you’ll encounter few instances where something isn’t scripted, there’s still a lot of atmosphere to soak in. The sound design, in particular, is ridiculous good. You’ll hear the patter of aliens in ventilation system, the terrible groans of aliens behind you, and these astoundingly dramatic crescendos that spurt from nowhere, often sparking you back into a state of high alert. Wear headphones if you have them, it’s worth it.

The art and visuals are also particularly inspired. The art manages to parallel the grim undertones of the narrative and the visual work is top-notch.

However, I wish there was more “new" in this game. A lot of the assets and elements of the original Dead Space for PC and consoles, including the enemies, the lockers, the weapons, and so on, are reproduced here. I suppose if you haven’t had experience previously, though, this isn’t a big deal.

Also, The Retina display visuals on the iPhone 4 look tremendous, though I think the control issues on this specific version of the game are made a little worse because of the lack of screen real estate. Your thumb will almost always obscure part of the game. I lean towards preferring the iPad version myself, but you’ll get a similar experience no matter what device you play on. 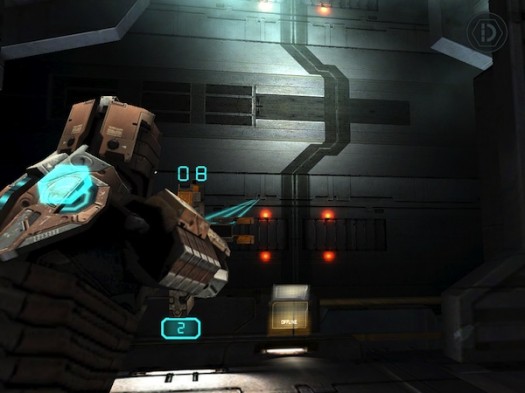 But, I think what’s best about Dead Space isn’t the art and sound despite their impressiveness; what’s best is how good this game is at keeping you thinking about what kind of terrible things can happen — that overwhelming sense of dread that you get from the best horror flicks.

In some sections, the game terrorizes you with traditional video game tropes, having you check bodies that you know will spurt to life. In another section, it plays with vertigo, and still in others, it hammers you with sudden conflicts, bouts of nothingness complimented by a roaring firefight, and hallucinations. It’s kind of amazing when you consider just how many ways this game tries to screw with you.

Sure, Dead Space is worth a download based on its production values alone. The team has successfully created a very, very dark title bolstered by a rich atmosphere that oozes everything you want out of a solid horror game. And the story isn’t so bad, either. As Vandal, you set off a series of events that it must, in turn, stop. It’s almost a revenge narrative, though to really dig into it would kinda kill the experience for you.

But, I feel like the weakness of the combat far surpasses its usefulness as a bolster for the scares. The end of the game turns into a series of unintelligible slugfests that will grate on you, especially on higher difficulty levels. It’s a bummer that more imaginative situations weren’t created for the last hour or so of the game because the rest of it manages to feel so smart.

This isn’t the scariest game on the planet, nor is it the best put together. The combat in particular is a black eye. But there’s a lot in Dead Space to keep you engaged and there’s some points of great design that I think you’ll appreciate — especially if you’re daring enough to play this on your sofa with the lights off and some great headphones on. Just keep the minor issues in mind and I don’t think you’ll leave the game disappointed. I suppose there’s also the chance EA could go back and implement fixes like sensitivity sliders or even some kind of aim assist system, but we’ll have to wait and see on that.