Last month it was revealed that the Mac App Store, which was announced by Steve Jobs last October, would be opening for business on January 6th. A quick glance at your lock screen should tell you that that day is today. While it was rumored that the Mac App Store wouldn’t officially become available until 12pm EST today, it appears that the folks at Apple just couldn’t wait to let everyone through the front door. Mac owners running OS X Snow Leopard can check their Software Update option for the newest version 10.6.6 which will add the Mac App Store to their dock. 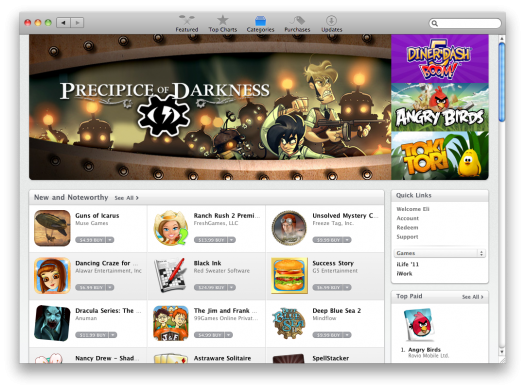 As of right now there only appears to be 74 apps available in the Games category, but here’s a short list of some of those games which are also available on iOS, and a few games exclusive to the Mac App Store. If you’re an iOS gamer, these new Mac games should be familiar:

There’s quite a few others as well, and for iOS App Store faithfuls who are used to games costing just a dollar or two, be prepared for some sticker shock with some of these titles. Enigmo and Enigmo 2 are selling for $14.99 each, Peggle and Peggle Nights run $9.99 each, and Lego Harry Potter Years 1-4 clocks in at $49.99. In the cases of Chopper 2 and Compression, these appear to be limited introductory sale prices, and those titles should eventually fetch a greater amount too. It will be interesting to see if the Mac App Store will incorporate the same race to the bottom pricing techniques that have been so prevalent on iOS.

We’re going to poke our noses around the brand new Mac App Store a bit more, and will likely bring you some impressions of how these games translate to full blown computers. Until then you can stop in at our brand new Mac App Store Games forum to discuss this experience with fellow forum members, and if you’re a Mac owner make sure you grab the latest software update so you can check it out for yourself.