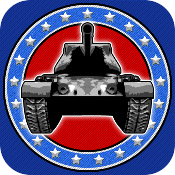 The onslaught of tower defense games seems as if it will never let up. Fortunately, when we’re treated to something special like the recently reviewed Lord of the Rings or Guns’n’Glory, neither does our hankering for slaughtering wave after wave of enemies at the base of our towers. iBomber Defense [App Store] is Cobra Mobile’s TD spin-off of their classic iBomber games on the iOS, taking you out of the cockpit and into the seat of Tower Master Extraordinaire.

Contrary to the abovementioned games, iBomber Defense is very true to the staple TD formula, on its face doing very little to toy with the basics. Instead, iBomber Defense concerns itself with tightening up the loose ends of games gone before it, by squeezing out a terrifically sharp look and interface, and really locking down a challenging campaign that will put your accumulated TD experience to the test. That’s not to say that it doesn’t innovate however, as iBomber Defense adds a few game-changing mechanics that you’ll be wondering how you did without. 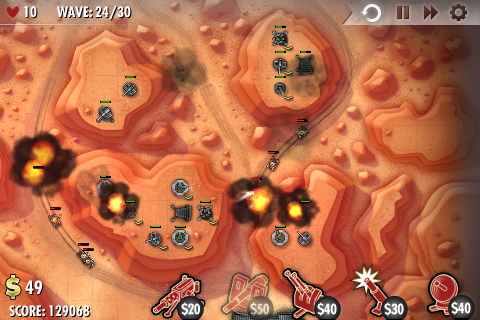 Primarily amongst these, is the ability to Rewind the current wave of creeps. This allows you to re-do your recent tower placement and upgrades and hopefully try to minimize your losses suffered by taking a fresh approach. Of course, this would be easily abused each wave, so the game restricts the amount of Rewinds you are allowed through a cooldown system. Secondly, is the impact that height has on the placement of towers. Towers placed on high ground are afforded a large range advantage, which is an essential tactical consideration to beat the more challenging missions.

The other major feature shows off its iBomber roots. All towers placed have their own life bar, and are attacked by enemies whenever they are within range. As expected, larger enemies pack more of a punch– such as when a fleet of battleships passes by– requiring you to micromanage your damaged assets and repair them lest they be destroyed completely. In another throwback to iBomber, aircraft are particularly devestating against towers and will take a more direct route to bombard your base. Other small additions purely functional, such as the ability to place and upgrade towers when pausing and the ability to zoom right out and easily pan the large maps and scan the multiple attack paths. 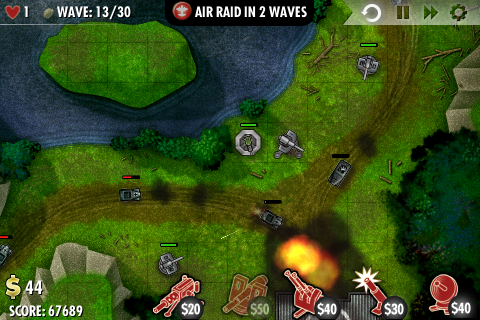 Of course, the highlight of TDs are the towers themselves. The iBomber Defense list of towers doesn’t read long, but is definitely just as focused as the rest of the game. Machine guns are your standard fast firing towers, Cannons are the slower, AOE, anti-vehicle big-guns, AA launch flak at enemy aircraft, Sabotage towers fire mortar round that slows creeps, Comms increase the battle effectiveness of nearby towers and two specialist towers unlocked later in the game, the Firestorm and X-Weapon each have additional weapon effects that augment the damage of other towers. A victory point is rewarded for completing each mission, and an additional point is up for grabs for doing so perfectly. These can then be spent upgrading overall tower effectiveness between levels, augmenting the in-game upgrade system.

There are 22 levels all-up stretching across the Axis and Allied campaigns of Africa, Europe and Russia, each with their own iconic settings. The backdrops and graphics in iBomber are simply stunning (with some really meaty explosion effects), and thankfully textures are at their intended resolution when fully zoomed in. Another neat addition that spices up the level offerings come by way of routine Counter Attacks, which appear on the map over levels already played and offer bonus victory points. These depict offensive pushes by the enemy as they swarm over part of your already established defenses, and force you to defend a newly opened path on the map. In addition to the Campaign, there is a Quick Play mode with its own separate achievements to obtain per level, and 3 variable difficulties to play through.

iBomber Defense is undoubtedly the man’s man of tower defense games. It doesn’t overextend itself with a multitude of new fandangled features, but instead builds upon nearly every aspect of the existing TD foundation and just does it better. It’s tough as nails even on the regular difficulty level, requires good forward thinking and strategic placement of gun embattlements, and also forces you to react quickly to multiple attacks happening simultaneously. It also has Game Center and Crystal support and is thoughtfully a Universal app which will definitely please iPad owners. In short, if you absolutely love tower defense games, then iBomber Defense is a tribute made just for you.