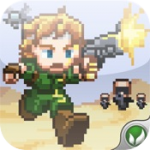 One of the great things about the App Store is that the games you buy have the potential to evolve over time with updates. Couple that with our forums which are chock full of helpful feedback from our members, and developers with a listening ear can turn a game into something that is much greater than it originally started out as. While the App Store has been around for over two years and this is nothing new, I’ve never quite seen anything like what has happened with Rogue Runner [99¢/Lite] from developer Glowdot Productions.

Rogue Runner is an “endless running” game like so many others that have recently been popular in the App Store. It was released two full months ago, and to be perfectly honest I just wasn’t very impressed with it at the time. It featured some excellent pixel art and a cool 16-bit style, but the content was limited and the gameplay just felt “off” compared to similar running games. Rogue Runner just didn’t do anything that different from the competition to make it stand above the rest. 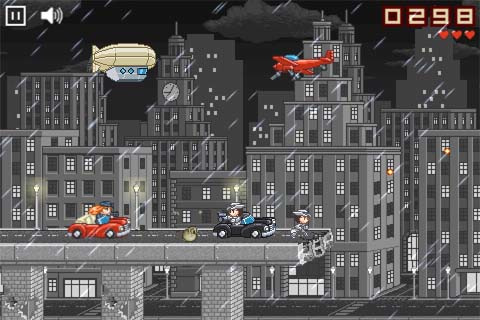 But then something happened. Glowdot listened to all the great feedback that was given in the forum thread, and the first update issued addressed a lot of the gameplay concerns. Rogue Runner was now much more enjoyable to play, and Glowdot vowed to issue content updates at a ridiculous pace. As soon as one update was approved, he would immediately submit the next one that he was working on while the previous one was in review. Two months and five updates later, and Rogue Runner has blossomed into much more than the initial release, and the beautiful thing is that the majority of content is directly inspired by the actual people playing the game.

Rogue Runner plays like your typical running game, with a button for jumping from platform to platform and another button for firing your weapon. Besides the enemy soldiers and vehicles that litter the ground, airborne enemies will fly in from the left side of the screen and attack from the right, and tapping on them will launch a missile in their direction while you continue to focus on blasting away the ground threat. It’s not really anything we haven’t seen before, but it works well and is a whole lot more playable since the first update.

Initially Rogue Runner contained just two vehicles to choose from and a single desert environment to play in. Now after the slew of updates the total is 6 environments, including a Gameboy-style theme and a 1920’s noir-style San Francisco, and 10 vehicles which range from Back to the Future’s Delorean to a dinosaur. All of this is merely cosmetic, mind you, but it’s very cool nonetheless to be able to choose from all the different options, and it adds a lot of enjoyment to the game. The video above shows a bunch of the different themes available in the game.

What isn’t cosmetic is the two additional game modes that have been added into Rogue Runner. The first is a chase mode, similar to the main game but with constant boss enemies that you chase after and battle. The second new mode is basically an entirely new game. It’s a top-down mode similar to Spy Hunter in a way, where you travel around different lanes on a highway shooting or ramming enemy cars while avoiding innocent pedestrians. This top-down mode could have easily been a second game from Glowdot, but instead it’s been included in the original Rogue Runner for free. You can check out the top-down video below.

Really though, there’s too many different things in Rogue Runner to cover them all. The best thing to do is check out the thread in our forums where the first post lists videos of the various themes and the second post details all the updates so far. Then, if there’s something you would like to see in the game, make sure and leave a comment about it because chances are pretty good that it could become a reality. A recent lite version has also been released, so you can actually experience what the gameplay is like before buying.

I still don’t think that Rogue Runner is the best of the endless running games. The jumping still feels a bit floaty and the controls are not as responsive as they should be. But you do get acclimated to how it plays and with Glowdot’s track record I have no doubt that the gameplay will be refined even further. What Rogue Runner really is, though, is a labor of love from both the developer and the community, and for that reason alone it is worth having a look at. I get excited whenever I see the Rogue Runner icon pop up in my list of updates in iTunes, and I can’t wait to see what sort of content comes out for it in the future.