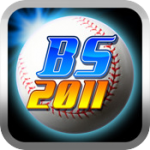 The Baseball Superstars series has come quite a long way on the iPhone. The original Baseball Superstars [$2.99 / Lite] was released in late 2008– It was a fairly obvious port from Gamevil’s cell phone version of the game, complete with stretched graphics, mediocre virtual controls, and not much else. When we caught up with Gamevil at the following GDC, they previewed an update that fixed pretty much everything that initially made us take a pass on reviewing the game when it was first released. With improved graphics, and a more sensible difficulty level, Baseball Superstars quickly became one of my favorite iPhone games.

It wasn’t much of a surprise to me when Baseball Superstars 2010 [$2.99 / Lite / HD] was released that we liked it just as much, if not more. Our review reflected the various refinements that Gamevil made to the series which only made the experience even better and the game even more difficult to put down. Baseball Superstars 2011 [$4.99] was just released, and as you may have guessed by now, it’s even better than the last. 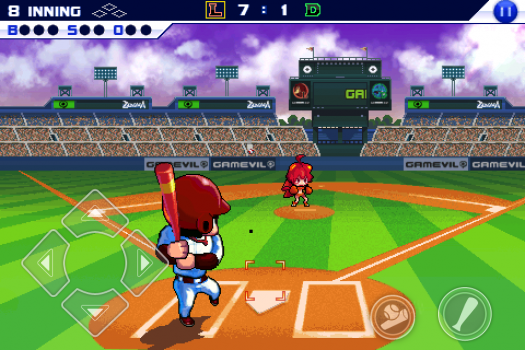 If you’ve never heard of this game series, here’s the gist: Gamevil has made the perfect baseball game for those of us who normally don’t care at all about baseball games. Sports games typically don’t do too much for me, and the closer they get to the “simulation" side of the spectrum, the less I’m interested in them. Gamevil takes things to the complete opposite end of that scale with Baseball Superstars via the integration of equally ridiculous super batters and pitchers, RPG elements, and tons of items to boost the aspects of your player’s performance. 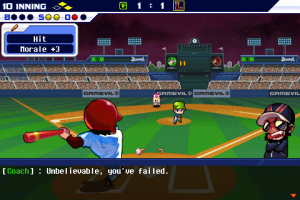 All this fun stuff takes place in “My League" mode where you choose whether you want to play as a batter or pitcher, then you just grind away batting and pitching in baseball game after baseball game. Between these games you’re given the opportunity to train your player by sending him off to participate in various training drills, and you can buy things like bats, helmets, and other items which all provide some form of benefit. These are bought either with the money your character earns playing (Their salary increases as they get better as well.) or via G Points which are slowly earned by playing but can be bought in large quantities via an IAP. Also, interestingly enough, these G Points can be sent to other players through an in-game mail system of sorts… So if you’ve got an excess of G Points and want to help out a friend who just got the game, you can send them up to 30,000 a day. 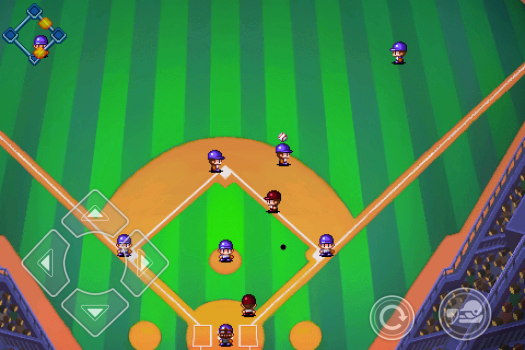 While “My League" mode only has you in charge of a single player, season mode has you looking after an entire team in addition to the overall appeal of your stadium. When graduating to season mode, there’s even more training options, and you’re able to trade players, hire coaches, and upgrade the various components of your home stadium. It’s all really fun, and all the silly player training and stadium tweaking really keeps you playing, providing great goals along the way such as just needing to play a few more games to buy an awesome new scoreboard for your team. In fact, the RPG elements of Baseball Superstars make it really hard to put down, because there’s a seemingly never-ending supply of upgrades that are just a few games away. 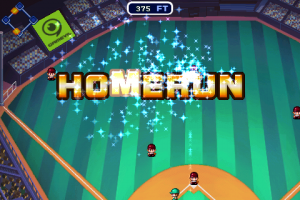 Once you’re happy with your team, you can take them online and battle other teams in versus mode. This is all asynchronous, and it’s basically the same as playing an exhibition game except you’re playing against the stats of another player’s team. This was introduced in last year’s Baseball Superstars, and it’s just as cool in this year’s iteration. The game modes don’t stop there though, there’s also a home run derby mode and a mission mode. 28 missions are included initially, and there’s a “download missions" option to get even more. These missions include things like just simply landing a successful bunt to hitting a grand slam. The previously mentioned G Points are awarded for any completed missions.

RPG elements provide a great goal to keep players who aren’t normally in to playing sports games interested, and the core gameplay is likely competent enough to make hardcore baseball fans happy. (As long as you’re OK with players wearing tiger heads for helmets batting with sledgehammers.) If you’re the kind of person who can get way too involved in any game that offers bars to fill and other types of RPG style progression, you’ll likely really enjoy Baseball Superstars 2011. Just be warned, once you get sucked in the game is almost impossible to put down. You’ll find yourself playing “just one more game" for hours.