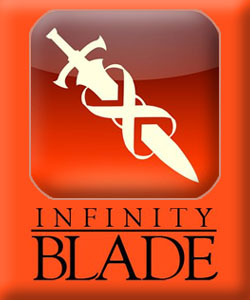 We’ve been kind of going crazy with Infinity Blade news lately, but it’s hard to not get excited for the first real game to come to the iOS platform that utilizes Unreal Engine 3 technology. Sure, Epic Citadel [Free] is an excellent display of the power of the platform, but it’s little more than a tech demo. MTV Multiplayer also had some time with Chair creative director Donald Mustard and they were able to get even more details regarding just what we can expect of the game.

Mustard confirms that the castle in Infinity Blade is in fact different from the one found in Epic Citadel, and went on to discuss the sword fighting nature of the game:

Mustard’s goal with “Infinity Blade is to “make a real sword fighting game. A game where it’s not just mashing buttons or pressing A to unleash an attack." On the iPhone and iPad, Mustard and his team found an ideal platform for the concept. “It’d be perfect to use this touch screen to where, basically, I swipe on the screen, and I’ve got this dude who swipes with me. We can actually make a sword fighting game where, if an attack is coming in at a funky angle, I can swipe my sword into it and parry the attack away."

He then goes on to describe Infinity Blade as “a blend between ‘Karateka,’ ‘Dragon’s Lair,’ ‘Punch-Out,’ with a whole bunch of other ‘Chair-ness’ thrown into it." We’ll be able to explore the castle for loot in between battles, and while we knew there was going to be free post-launch updates, I don’t think anyone expected the amount that they’re planning which Donald Mustard is describing as “like a constant stream of free content," citing games like Pocket God and Doodle Jump as examples of how well updating works.

If you’re as excited as we are about Infinity Blade, be sure to read the full interview and if you haven’t already, take a look at the trailer we posted earlier today.