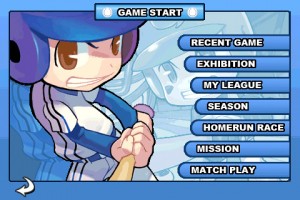 Baseball Superstars 2010 is a full featured baseball game with multiple game modes ranging from simple exhibition games to full seasons or homerun derbies. What sets the game apart from the pack are the RPG elements that allow you to create your own pitcher or batter and build their statistics in “My League" mode.

Various exercises and social events are available to train your players along with items to purchase such as bats and shoes with your annual salary. Once you have built up your players (up to 4 batters and 2 pitchers), you can use those players in the full season mode where you will need to manage your team’s ability to work together as well as their morale. 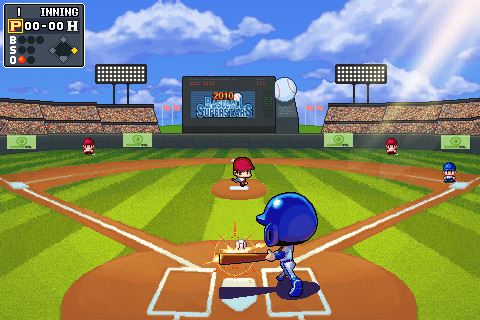 If this sounds crazy, that’s because it is. Both Baseball Superstars games have this odd mixture of really solid Baseball gameplay and these strange RPG elements that seem silly at first but start to have the same allure as leveling up any character in an RPG. I’ve never really been a sports gamer, but the RPG elements in the original Baseball Superstars really sucked me in, and the sequel is doing the same.

There’s an additional level to the lovable absurdity in Baseball Superstars 2010 with the included “super" players. There is a pitcher that’s a robot, a batter who is some kind of nurse, and in a game I just played the opposing team’s pitcher performed a super move turning all the baseballs they pitched into bombs. These crazy components to the game with the RPG elements mentioned earlier somehow really make this game appeal to me, and I’m not even a baseball fan. 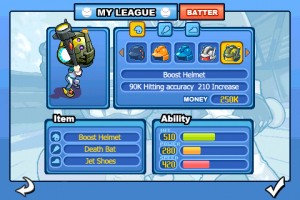 Baseball Superstars 2010 also offers an interesting solution to online multiplayer. Everything is done via a asynchronous match mode where you can go online to search for teams to play. In this mode, you’re essentially downloading the player statistics of the team you select and playing against them locally on your device.

Sure, it’s not real-time multiplayer, but the ability to download your friend’s team and play against them when you have time should fit in well with the portable gaming habits of a lot of iPhone gamers where you’re only playing in small increments while you’re on the go.

If you don’t want to get involved in a full baseball game, the homerun derbies and missions are great for playing for a few minutes at a time. Competing in both of these game modes will earn points that you can then spend to unlock additional characters and buy items.