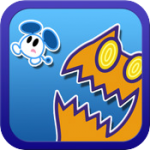 Tonight Sega released their classic Dreamcast puzzle game, and huge fan favorite, ChuChu Rocket! [$4.99/HD] into the App Store. We had a chance to go hands-on with ChuChu Rocket! at Sega’s offices last month and came away excited for the iPhone and iPad version of the game. Sega has taken the entirety of the original ChuChu Rocket! and reworked it for the touch screen, and the results are terrific. While the graphics are essentially the same, the UI actually feels much more natural than that of the Dreamcast. This game seems almost meant for touch screen controls, and whether or not you were a fan of the original Dreamcast release ChuChu Rocket! is a puzzle game that needs to be in your collection.

Starting the game forces you through a very short tutorial explaining how to play ChuChu Rocket! The tutorial is so short because this game is ridiculously easy to play. The core of the gameplay involves placing various arrows around a checkerboard-like playfield and then unleashing your crew of mice who will blindly march forward. The only things that stray them from their path are running into your strategically placed arrows or hitting a wall which will cause them to turn clockwise. Your mice must avoid running into hazards, like holes and cats, on their way to their escape rockets. 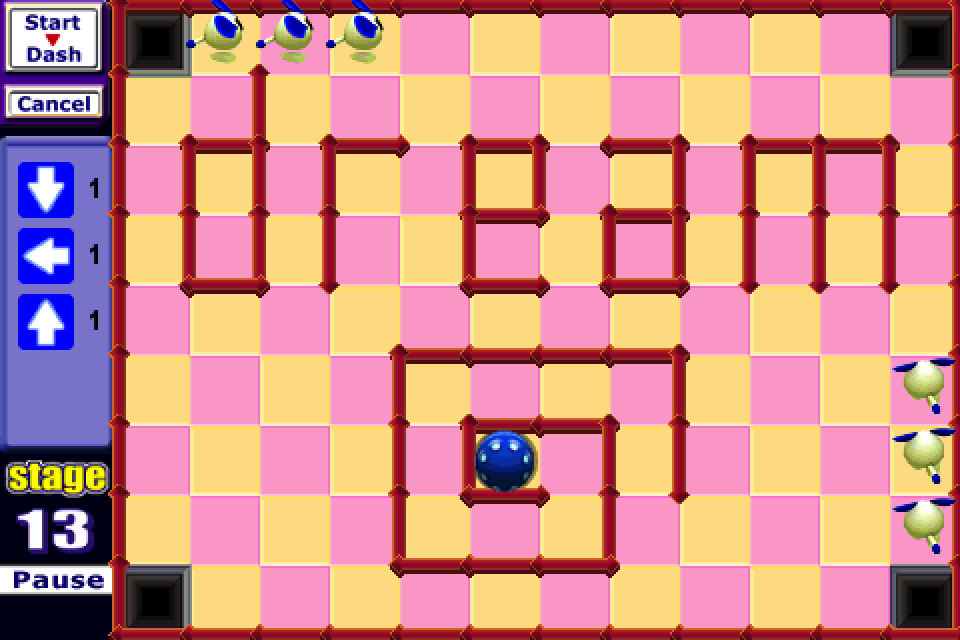 Placing arrows simply requires touching a square of the game board and swiping in the direction of the arrow you want. Tapping a placed arrow erases it if you make a mistake. A button in the upper left sets your mice in motion, and tapping that button again speeds up time if you’re feeling impatient. And that’s pretty much it. The controls are so intuitive and easy to perform that you can focus squarely on solving the fiendishly clever puzzles and frantic multiplayer in ChuChu Rocket!

The bulk of the content in ChuChu Rocket! is the 100 levels in Puzzle mode. There is no time limit in these levels, and the goal is simply to get all of your mice safely to the rockets. This mode starts out easy enough, but quickly ramps up in difficulty as some of the later levels had me nearly pulling my hair out trying to find the correct positions to place each arrow. It’s a good kind of difficulty though, one that urges you to keep trying until you’ve figured out the solution to a puzzle you are stuck on. 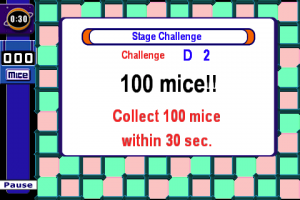 Then there is Challenge mode which features 25 timed levels that each have a specific task to complete. These can be things like directing a certain number of mice to the rocket before time runs out, or even going against the very nature of the game and running them all into a cat as quickly as possible to be eaten. The Challenge levels are a nice diversion from the typical gameplay found in Puzzle mode, and the best time for each level is saved with your total time for completing all levels being tracked through Game Center leaderboards.

Likely the thing that will keep you coming back to ChuChu Rocket! long after you’ve completed the rest of the game is the phenomenal multiplayer mode. Unfortunately there is no online multiplayer as was first announced, but the local and same-device multiplayer modes are crazy amounts of fun if you have friends to play the game with. The multiplayer gives each player their own rocket and up to three arrows to place. You’re constantly trying to direct a stream of mice into your own rocket, while trying to direct cats into your opponents’ rockets. Random events will trigger to mix up the action like switching the position of everyone’s rockets or releasing a mega stream of mice into the game. 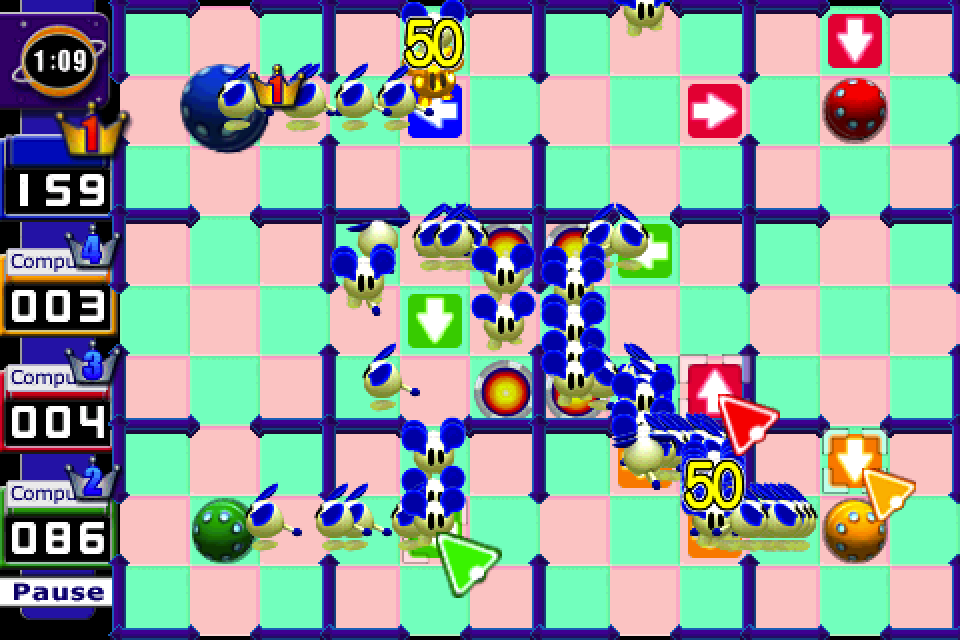 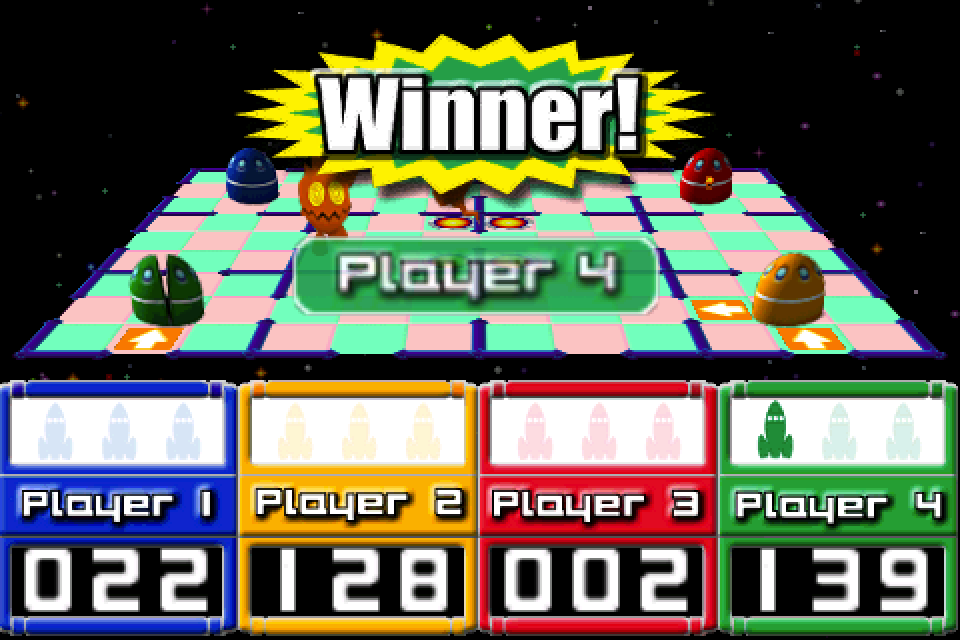 Multiplayer is a blast as everyone is simultaneously trying to screw each other over, and the lead changes hands suddenly and often. It supports up to 4 players over local WiFi, and if you have the iPad version you can play with up to 4 players all on the same screen. If you don’t happen to have any friends around, you can set up to 3 AI bots to play with on any of the 24 multiplayer maps. Nothing can top talking smack to your buddies while playing in the same room, but the option for bots is pretty comparable and lets you take advantage of this mode even if you’re solo.

I can’t really think of too much that I don’t like about ChuChu Rocket! It can be pretty difficult at times, but there’s no real penalty for retrying levels that you get stuck on and it’s really satisfying to finally nail it when you do. The graphics aren’t Retina Display ready, but the game still looks quite sharp on 4th generation devices and it actually suits the retro nature of the game. The lack of online multiplayer is a disappointment, especially since Game Center is already integrated for leaderboards and achievements, but hopefully this can be added down the line. It will take quite a while before you’re able to complete all of the Puzzle and Challenge levels, and the multiplayer mode could conceivably last you the rest of eternity. ChuChu Rocket! is just one of the best puzzle games around, much as it was 10 years ago on the Dreamcast, and with the new touch interface it actually succeeds at being the definitive version to own.