Last night Chillingo’s WackyLands Boss [99¢] hit the App Store, and turned gaming on its head by allowing you to quite literally play as the boss, slaying hordes of innocent knights, archers, wizards, and more leaving nothing but destruction in your wake. To sweeten the deal, you’re not stuck with one boring old boss to play as either. Your boss is incredibly customizable with even more customization that unlocks as you play through the game.

Only one control option is included, and every action in the game is performed via tapping or swiping gestures. For instance, holding one side of the screen causes your boss to walk that way, tapping in a direction executes a quick attack, and swiping in a direction performs a slower but more powerful swing. Rolling to evade is accomplished by swiping up on either side of the screen, and picking up in-game objects involves swiping up on your boss. 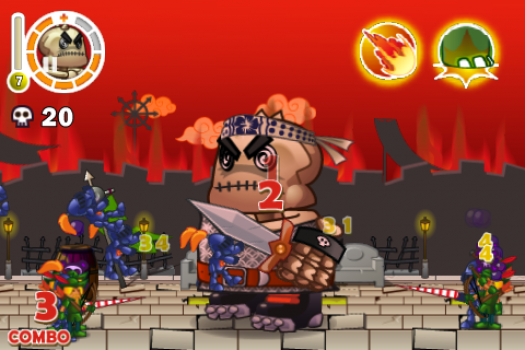 It all sounds good, but in action, it leaves a little to be desired especially later in the game when precise control of your boss is required. As much as I hate to say it, I almost wish there was a virtual D-Pad and button option. WackyLands Boss reminds me a lot of Samurai: Way of the Warrior [$1.99] in that way too many deaths result from game disagreeing with what you’re trying to get your character to do as you wildly tap and swipe trying to stay alive.

Once you do get a hang of the controls, WackyLands Boss is a lot of fun. Gameplay can be a little repetitive at times since you’re basically just walking to the right murdering swaths of defenders, but this is greatly defrayed by an experience system. Leveling up unlocks more and more weapons, armors, special abilities, and evolutions for your boss. Using coins that you take from your victims, you can really trick out your boss by buying swords, clubs, shoes, and all kinds of other items that boost your stats. In addition, as you progress through the story you also unlock three simple but fun mini games.

WackyLands Boss is a game that’s dripping with charm. Whether you decide to customize your boss to look like a bloodthirsty killer or any number of other silly combinations, it’s a great time rampaging through the countryside tossing barrels of poison, eating princesses to regain health, and punching down castles. I’d like to see some more control options, but other than that, this is a beat-em-up that’s easy to recommend.