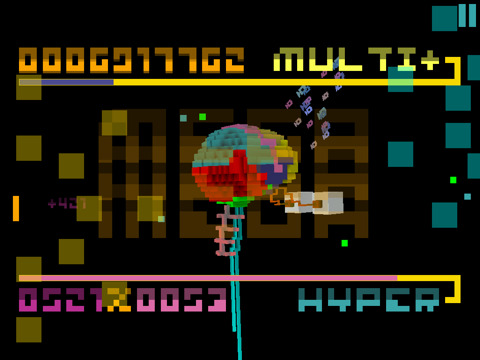 Back in July we brought word that Gaijin Games had teamed up with Namco Bandai to develop an iOS adaptation of Gaijin’s Wiiware rhythm action title BIT.TRIP BEAT. We’re happy to report that the fruits of their labors have just made their App Store debut, with a version for both the iPhone / iPod touch [link] and the iPad [link]. 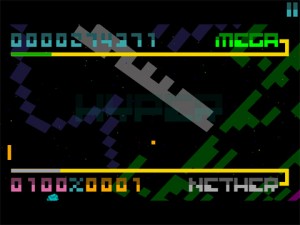 One of a series of four Bit.Trip titles by Gaijin (published through the Wii Shop by Aksys Games), Bit.Trip Beat is something like a cross between Pong and Rez as an accelerometer-equipped Atari 2600 might play them. The game puts you in tilt or touch control of an on-screen paddle with the goal of bouncing waves of oncoming blocks whence they came. The impact timings of the aforementioned blocks are synched with the excellent chiptune audio track while abstract / futuristic animations float in the backdrop, both of which give the game its sort of Rez dynamic. And, it’s all done up in brilliant colors and oh-so-lovely jaggy, chunky pixels, with a chiptune soundtrack appropriately accompanying the on-screen action.

The further you progress through the game, successfully returning oncoming blocks, the more complex and evolved the visual presentation becomes. Miss too many blocks, and the visuals slowly regress to a simple, black and white state, in another apparent nod to Rez.

“We’re very excited for the BIT.TRIP series to join in the fight against digital boredom alongside the rank and file of legendary Namco franchises, such as PAC-MAN, Katamari Damacy and Mr. Driller. When considering a publishing partner for our series on mobile devices, Namco was among our top choices. After playing the final iPhone version, we positively freaked out. Namco has brought an absolutely pure BIT.TRIP experience to the mobile market and we look forward to continuing the series with them." 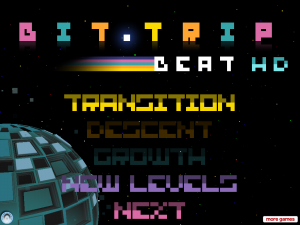 And I’d have to agree with Neuse as regards the “pure" nature of this game on the iOS platform, if “pure" speaks to a faithful, well-implemented conversion. I’ve spent significant time with the Wiiware original, and the game plays wonderfully on the iPhone and iPad. In fact, I find that the game offers more precise controls on the iOS devices than it does using the Wiimote — in touch-control mode in particular (though tilt is also an option). In my opinion, it’s more enjoyable on the iPhone or iPad than on the Wii.

BIT.TRIP BEAT features local and online multiplayer (through Game Center), but at the moment it’s only two-player head-to-head — four-player is coming in a future update. What’s more, three additional levels (for now) are available as in-game, downloadable content. (One of the complaints about the original is the somewhat limited gameplay content.)

See the developer’s short trailer featuring a bit of gameplay, or have a look at the Wii video we posted earlier, featuring nearly identical game content.

BIT.TRIP BEAT is one of those games that draws you in and sends you to a sort of ‘zone’ where much of the mundane meatspace world just kind of falls away. Anyone who enjoys rhythm gaming or retro-styling in general should have a really good time with this one.

BIT.TRIP BEAT for the iPhone and iPad are currently on a limited time, 50% off sale at the time of this writing.