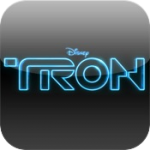 There are already a plethora of Tron inspired games on the App Store, predominantly in the form of light bike games. And while some of them are indeed quite entertaining, none of them are actual Tron licensed games. That changed this weekend as Disney has released its own officially branded Tron game in anticipation of the Tron Legacy movie and Tron Evolution console game, both due for release later this year. While not the greatest game you’ll ever play, Tron for iPhone is still pretty cool, and has a great visual style that should appeal to fans of the movies franchise.

What you initially get for this free Tron game is a dual stick tank shooter which we previewed during E3 last month. It’s surprisingly fun to play, albeit a little uninspired. Fifteen single player levels have you fighting off enemies as you trigger switches that eventually unlock the end goal of the level. Your tank weapons can be upgraded giving you some satisfying firepower, although these upgrades don’t carry over level to level. It can be frustratingly hard at times as enemies swarm you from every direction and can deplete your entire health allotment in the blink of an eye. Still, for a game that cost you nothing to try, it’s not bad.

What’s more interesting than the single player offering is the multiplayer mode. At the beginning of the game you’ll choose what color faction you want to be associated with, and a running total of the weekly performance of each faction can be viewed from within the game. It’s a neat idea and gives you the feeling of being part of a team, and apparently according to our forums the orange faction is the unofficial faction of TouchArcade, if you’d like to show your TA pride. Online matches connect very easily and you can choose to partake in 2, 4, or 6 player matches. It’s pretty fun, but it’s hard to get into matches where people are taking things very seriously and expect to get your own teammates killing you fairly often. 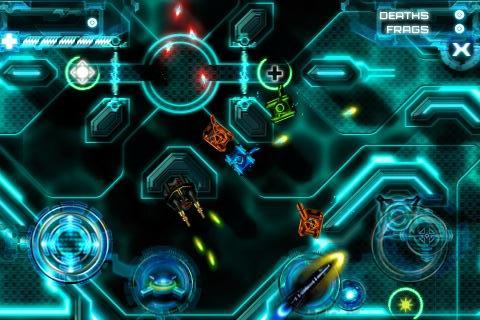 A clever bit of cryptic information is to be found in the games description, which is essentially just a string of binary code. Once solved, it reads “This TRON app will evolve. ComiTRON coming 072210”. Not coincidentally, 7/22/10 is the start of Comi-Con in San Diego, with a Tron panel discussion scheduled for this very same day. We’re not sure if that means they’ll just be unveiling new information regarding the iPhone game or if Disney actually has the first update to Tron set for release on this day. Either way, we’ll be eager to find out, as they’ve confirmed that Light Bike and Discs modes are planned additions to the game.