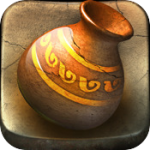 I’m not entirely sure that I’d call Infinite Dreams’ Let’s create! Pottery HD [$4.99] a game, strictly speaking, but somehow it managed to soak up a ridiculous amount of my time this weekend as the iPad was passed around the house with everyone making their own pottery creation. It’s not strictly an entertainment app either, as there are objectives to follow, goals to meet, and things to unlock as well. Regardless of how you want to classify it, Let’s create! Pottery HD is a really cool experience, and shares a similar feel to the Zen Bound games with a relaxing mood and controls that feel remarkably natural.

As you may suspect from the title of the game, the object of Let’s create! Pottery HD is to create pottery. Tapping “create" on the main menu takes you to a spinning pottery wheel with a lump of clay on it that you then transform using your finger. Dragging up or down changes the height of your piece of pottery, while touching and dragging in or out changes the width or whatever section you’re touching. I’m sure there will be some pottery wheel veterans who don’t like how dumbed down this all is, as you never need to deal with adding more clay, maintaining any kind of balance, or the million other things that can lead to all-out pottery disaster. 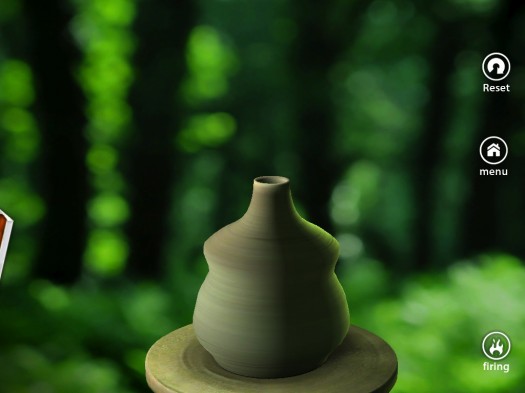 Once you’re satisfied with the shape of your creation, you fire it up in the kiln. After that’s complete, you’re able to paint it with all kinds of different colored paints and “brushes" which are basically just stamp tools of pre-made stripes and other designs. Following that, you then add your masterpiece to your collection, at which point you can either keep it there to bring up later (and send emails including an image of it) or you can sell your creation at auction. Using the coins you earn from selling your in-game artwork you can then buy more paints and brushes to make even more diverse pottery.

All this by itself would be cool, and make an entertaining little art app, but what really caught my interest is the fake email system that’s included in game. As the player you take the role of the proprietor of some kind of custom pottery shop, taking email orders from people who send you photos of things that they want, and you try as hard as you can to duplicate them. While you’re trying your hand at filling their order, you can slide the photo they sent you out from the side of the screen and see the customer’s satisfaction levels in real time with both the shape and coloring on a scale of five stars. 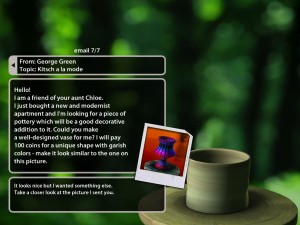 When your creation is completed, you mail it off to them, and if it meets their satisfaction you’re met with a reward and another order. If not, it’s back to the drawing board (or, pottery wheel, I suppose). This component of the game seems entirely optional, and initially just seemed like a basic tutorial I had chosen to ignore. After revisiting the faux-inbox, it doesn’t take long until the creations your customers are asking you to come up with get quite complex, requiring careful study of the photo and sometimes even trying more than once to meet their pottery needs.

It seems so far that everyone on our forums who has tried the game has enjoyed it, although I do agree with some of the criticisms, specifically, Let’s create! Pottery HD is a game that badly needs a profile system for multiple players. Easy to play games like this on a device like like the iPad are just begging to get passed around to give everyone in your house a try. The email pottery commission system is really cool, but once you get a few projects in they start to become way too complicated for a beginning player.

Even without a multiple player profile system, Let’s create! Pottery HD is totally worth a look. The entire game is a very unique experience that works extremely well on the iPad. As mentioned, I could see some people being annoyed by how amazingly simplified the developers have made everything, but as a veteran of horrible summer camp pottery creations that only a mother could love– I appreciate the non-existant skill requirement to make great looking pottery in game.