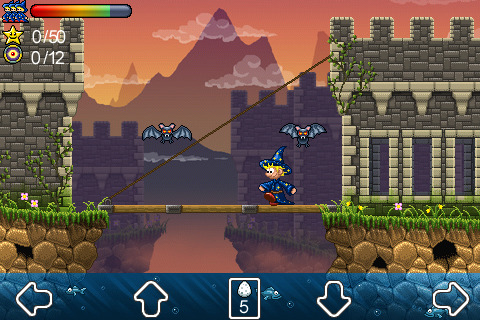 Back in April of last year we ran a story about mobile developer ZodTTD’s announcement of the forthcoming platform puzzle adventure game Wizzley Presto and the Mysterious Time Machine. What made the project interesting was the fact that the developers set a goal to complete the development of the game within 30 days, publicly documenting their progress along the way at 30daygame.com.

A cool element of this project is the blog. We are doing this game in 30 days, from an idea to a finished product for AppStore. Best of all we’re showing all of what is involved along the way. Expect lots of interesting posts for all those who wonder what it’s like programming a game on the iPhone & iPod Touch!

Early this month the game (renamed Wizzley Presto and the Vampire’s Tomb) went live in the App Store [link]. But hey — wait a minute — that’s a lot more than 30 days! I contacted the developers to find out what gives. 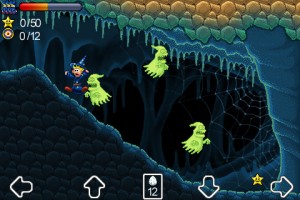 I spoke with project programmer Craig Rothwell, who also happens to be the person behind the OpenPandora handheld and the iControlPad iPhone accessory. He indicates that he achieved “mission accomplished" within 30 days, as planned, but the decision was made to expand the title into something overall more complete.

We did indeed complete the 30 day game but it was rather nice and we decided rather than releasing it then as a ‘tech demo’ we would like to make it bigger and better.

Now one thing a lot of people don’t realise is that 90% of ‘full’ games which have development started are never finished, team members get bored, people move to other projects, the steam runs out and the ‘on no! real work!’ syndrome starts. Fortunately I’ve worked on games before (for the Gameboy color and GBA) so I knew how to just knuckle down and get on with it, sleepless nights and all.

So over the space of 8 months we worked on a proper plot, scenes, monsters and dialogue.

By Christmas 2009, the game was ready to go — as developed and tested in the iPhone simulator — but, when it was loaded onto an actual device, it didn’t work. (The simulator is not the perfect testing ground…) Work began to get the game running on actual metal, and in March a few extra features (such as egg throwing) were added in before submission to Apple. And, after a rejection / resubmission snafu, Wizzley Presto has landed in the App Store.

It’s a pretty nice title, actually. It features extremely impressive oldschool artwork reminiscent of  by pixel artist Ruckage along with a nice audio track. The goal of the game is to traverse screen after screen of obstacle, puzzle, and enemy-laden platforms, by way of button touch controls, in order to make it through all three “chapters," each bringing a save point. It’s not so much a Turrican or Mario affair, but more a modestly-paced puzzle solving experience reminiscent of the classic Dizzy series. Stand on a switch to activate a sliding bridge, find the appropriate tool to make it past an obstacle, etc. Less arcade action and more problem solving. Kind of a Babylonian Twins — without the twins, to reference an existing iPhone title.

The only notable drawback with the game is a performance issue that we’ve demonstrated on our iPhone 4 test device. On this unit, the menu and in-game animation is problematically slow, a glitch that has plagued a number of other games running on Apple’s latest. The developer has indicated that he is collecting user feedback and plans to respond via updates to the game. We expect the performance issue to be addressed shortly, but until an update is issued, iPhone 4 users should probably hang back.

Wizzley Presto and the Vampires Tomb is lovely, clever, and quite enjoyable. I’m pleased the team took the extra time needed to build the game up to its current form (and hope that they soon spend some time on the iPhone 4 fix). And, if you have what it takes to be the first to finish the challenge, the developers have a $1,500 prize waiting for you.