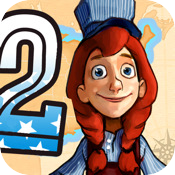 The original Train Conductor was a sleeper hit that we really enjoyed and remains a staple on many users’ iOS devices. That version featured a distinct Australian backdrop that many of us may have found unfamiliar. Train Conductor 2: USA [iPhone/ iPad] puts Uncle Sam in the driver’s seat, embarking on 5 new levels from New York to the Grand Canyon.

Train Conductor 2 retains the basic Flight Control on Rails gameplay from the first game, but re-imagines both the setting and each level’s special gameplay twist. 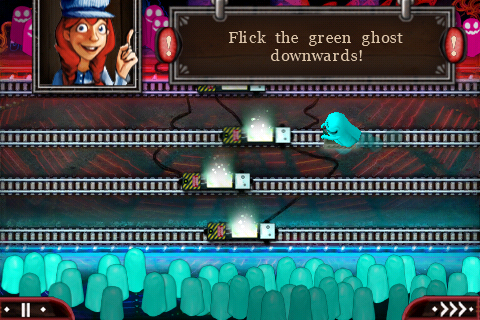 One such twist challenges you to flick trains upwards and or downwards depending on their color, whilst the others are a spin on the standard formula. The New York subway sequence for example provides non-sensical numerical and alphabetical line names that confuse just as they do in real life.

Some early impressions from a fan of the original in our forums:

Each level is a survival level. You route your trains until you crash. When you crash your score is displayed and you then have a choice of playing the level again or going to the map which is a US map drawn in the same style as the Aussie map in the first game. You also get a choice to post the results to Facebook or Twitter. To find out how many more trains you need to route to unlock the next city you just tap the locked city to activate the bubble with the answer. The visual style is consistent with the original game.
….
There is no longer night/day button. The cities now can only be played in one mode i.e. New York is a day map and Nashville is a night map with Ghost trains. I am enjoying the game so far and can recommend it, especially at $0.99.

For all these new gameplay mechanics though, it seems that in some ways Train Conductor 2 is a scaled back version of the first game. Objectives required to unlock the next level are much easier to obtain; there are no day/night sequences for each track as there was in the first game; and there is no longer level bonus’ for speeding up time or acheiving a streak of connections. Facebook high scores also replace the Plus+ integration from the previous iteration.

In fact, if you had not played either game and were interested in the base gameplay, we’d still recommend you to try the original Train Conductor first. What Train Conductor 2 does add is a flashier, higher resolution look for the iPad and iPhone 4 Retina display and a funky new soundtrack to suit each of the new U.S. level themes.

Update: It seems like iPad users have cause for concern; readers have reported a lacklustre iPad port– foregoing the higher resolution of the iPhone 4 in favor of blurry, upscaled textures and no fullscreen support. iPad users may want to steer clear until the developers have addressed this.