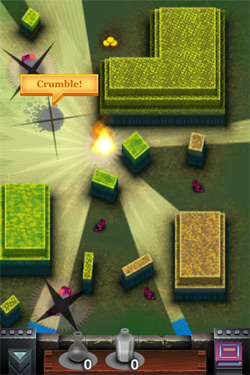 Last weekend we posted a preview of Ratloop / Chillingo’s upcoming illumination puzzler (well, that’s really the best way to describe it) Helsing’s Fire. This weekend the game went live in the App Store [link] and we’ve had a chance to spend some time with it.

Helsing’s Fire sends you on a quest to destroy Dracula, placing you in 90 randomly generated, dungeon-like levels across three different worlds (The Abandoned Village, The Haunted Forest, The Cursed Castle), peopled by the 13 different monster types that comprise Dracula’s horde. The challenge is to eliminate said beasties by moving your torch about the screen, which casts brilliant beams of light and dark shadows about the play area. Light up as many ghouls as you can and strike with a powerful tonic, banishing them to oblivion. But, be careful — not all that dwell in The Shadow Blight are creatures of darkness, and those that aren’t must be spared. It’s a highly innovative puzzle mechanic, which we’ve never encountered before. 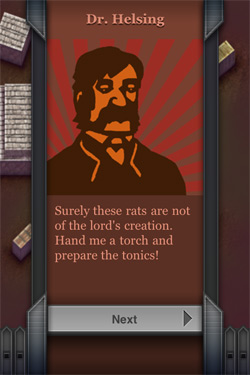 In each level you control the placement of your torch by either dragging it about the screen with a finger or tapping on a new target destination. In the majority of the Story Mode at the core of the game, you use these controls to arrange your torchlight just so, and then trigger the colored potions when you’re ready. But, as I came to find out after getting my hands on the title, at the completion of each world lies a boss battle, of sorts, that puts your fingers in motion at a rather quick clip. In these encounters, a sinister being of evil leaps from the top of one obstacle to another, firing at you all the while. Only during these brief jaunts can you illuminate and decimate, while dodging his attacks, of course. It’s nice to find a touch of arcade action thrown into the mix, like this.

Survival Mode is a timed affair where the pressure’s on to figure out the proper potion sequence and get your torch placed as efficiently as possible. Because enemy creatures are sometimes wrapped in several multi-colored layers of protection, it really can put your brain through the ringer to get the potion sequence and torch positions laid out in sound order. And, midway through the game, the arrival of ghosts — which can only be seen in shadow — are no help at all. Deliciously frustrating, it is.

While the screenshots and preview video definitely piqued my interest, Helsing’s Fire is even better than I expected. Dark gothic creatures wrapped up in amusing sequences of Victorian dialogue and, not to be forgotten, that excellent light and shadow puzzle mechanic. It’s one of the most unique games I’ve ever played and is a true App Store gem. Surely only a creature of darkness would let this one slip by them.